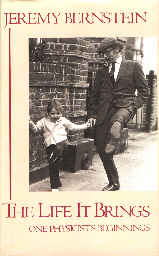 In case you missed any of Bernstein's articles in the New Yorker, they are assembled here in a coherency of form resembling an autobiography.

One of the charms of this book is Bernstein's quotes of famous physicists like these three from Robert Oppenheimer:

"physics and the obvious excellences of life it brings" (title quote)

"though every prospect pleases and only man is vile." (he quoted this from a Norwegian hymn when asked about Princeton)

(his response to someone who remarked, "There are only three people in the world who understand relativity."): "Three? Who's the other one?"

We stumble into and out of the lives of Schwinger, Einstein, Oppenheimer, Frank, Michel, Dirak, Bohr, and a dozen or so physics pioneers and Nobel Prize winners. In "Deuteronomy" (chapter 2) we find the "Young Man with a Horn" (as JB was called in his high school yearbook) studying deuterium particles and co-authoring papers with Nobel laureates, Yang and Lee at Princeton.

In another time we find him scurrying from Los Almos to Las Vegas to study blackjack and atomic bomb blasts. The casinos had a blue light which they turned on whenever a blast was due to happen the next morning so that the scientists could leave in time for the sunrise blast.

In the last chapter we follow his American-in-Paris adventures with the creator of quark theory, Gell-Mann. Gell-Mann, Oppenheimer, and Schwinger were the three prodigies of Bernstein's life. They could each solve impossibly complex problems quickly and simply. One such problem involved the weighing of 12 balls on a balance scale. All twelve look the same, but one ball weighs slightly more or less. The goal is to find the deviant ball and whether it weighs more of less in exactly three weighings. JB stayed up all night solving it and asked Gell-Mann if he'd ever heard of the problem. Gell-Mann said no and proceeded to solve it on the spot, generalizing the solution to any number of balls.