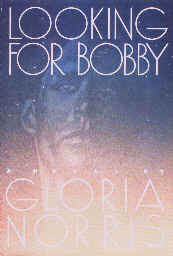 A READER'S JOURNAL, Volume 1
:
Looking For Bobby
by
Gloria Norris
Published by Alfred A. Knopf in 1985
Book Review by Bobby Matherne ©2002

This book had been on my shelf for several years -- I bought it because of the title. A week ago I had a dream in which someone was showing me some of her books and Looking For Bobby was one of them. Not as dramatic as a book falling off a shelf into my hands, but just as effective. the night before the dream, I had been surfing the Net and had encountered a work by Chekhov, The Seagull, that I was unfamiliar with. As I began reading Looking For Bobby, I found the heroine Marianne going to work for her first cousin Bobby, who is directing an off-Broadway version of Chekhov's Seagull set in Mississippi delta country. I continued reading Bobby but made a mental note to locate and read Seagull.

Marianne's first words as a baby was "Bobby" as she was being held by her first cousin. She was his constant companion and playmate during childhood, so much so that she only seemed to really live when he was around. One year Bobby devoted an entire summer vacation to studying the piano and Marianne just vegetated and stewed over not having Bobby to play with.

Bobby grew up and left town and Marianne married a local rich kid. Five years in a stifling marriage with a mother-in-law who visits five times a day to offer helpful advice to her, proved too much for Marianne and she broke loose from her delta town to join Bobby in the big city. She became his assistant stage manager and leaned the intricacies of New York stage productions. After Bobby bolts the company for parts unknown, she stayed and became a successful agent. Years later on a vacation trip to Oaxaca, Mexico, she recognized Bobby dancing with some natives on the stage in a small bar and they leave together.

Over salsa and sex she discovered the reasons for Bobby's strange behaviors, the lost summer, and the abrupt pulling roots and leaving town. Ready to scuttle her new lucrative job in Los Angeles to stay with Bobby forever, she awoke the next morning to find him gone and she, once again, looking for Bobby.