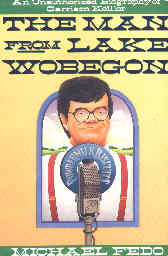 A READER'S JOURNAL, Volume 1
:
The Man From Lake Wobegon
by
Michael Fedo
An Unauthorized Biography of Garrison Keillor
Published by St Martins Press in 1987
Book Review by Bobby Matherne ©2002

The man from Lake Wobegon would not be happy with this unauthorized biography by Michael Fedo and St. Martins Press. Not only is it unauthorized but it is counter to the wishes of Garrison Keillor as expressed in a letter from his lawyer.

Gary was a shy, almost invisible kid from Anoka, Minnesota - the only thing visible about him, other than his height, was his writing that appeared in the local newspaper where he worked as stringer for $3 a story and the high school literary magazine that he helped form.

He took a major in journalism rather than English because he wanted to write for the pubic consumption and to do that required the concise style of a newspaper reporter. He was not a good reporter, however, due to his shyness. He might ask only one question during an interview, but it was a good question. His thoughtful nature made him a poor conversationalist (based on quantity). When asked a question, he might think for minutes before answering, and the answer would sound like one of his famous Prairie Home Companion monologues (which number over 1.5 million words - a prodigious literary output). He would sometimes visit friends for an hour and leave without saying a word during the entire time, or spend an afternoon at a Twins game with his best friend and speak hardly a word. He was ever the watcher, which bothered some people. His perception of their feelings led to his need for anonymity in order to be a detached observer (one who didn't disturb the scene being observed). When his fame made his anonymity impossible, he headed for Denmark with his second wife, Ulla Skaverd. (He left behind his live-in companion and PHC producer, Margaret Moos.) Later he re-established his anonymity back in the US by moving into New York City where nearly everyone can remain anonymous indefinitely.

Since the author's only source of information comes from people who don't respect an individual's wish for privacy, the data in the book is in the negative vein, focusing on GK's temper, recalcitrance, lack of tact, abrupt firings of long-time PHC stars(actually these were only non-rehirings), etc. In spite of all this, the book portrays little shy Gary as a kid who outgrew the fortress or "garrison" he had built around himself through his shyness by "putting himself out there" for his many fans.