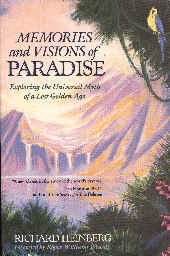 Memories and Visions of Paradise by Richard Heinberg
Exploring the Universal Myth of a Lost Golden Age
Published by Jeremy P. Tarcher in 1989
A Book Review by Bobby Matherne ©2002

Once upon a time there was a golden age when all men lived in peace and harmony with each other. Is this golden age a fairy tale, is it an actual time in human history, or is it a metaphor for a different way of being? Heinberg covers these possibilities and several more in detail in this book.

The author moved into Immanuel Velikovsky's home to be his research assistant five days before the cosmologist's death and stayed on to edit IV's last two manuscripts, "Mankind in Amnesia" and "Stargazers and Gravediggers." His work editing Velikovsky's books evidently piqued his interest in myths, their veracity, their origin, and their functionality and eventually led to his writing this book.

In the first part of the book he covers the truth of myths similarly to Jung and Campbell by delineating the similarities of myths across widely disparate cultures. Whether of Norse or aboriginal New Zealand origin, the stories of a golden age in paradise mirror each other too closely to be mere coincidence.

The fall from grace in Eden and its consequences in the presence of evil, catastrophes, technological progress, and visions of utopias comes under Heinberg's scholarly microscope. He invites us to peek through the eyepiece with him as he examines each dissected slice of history, myth, and speculation. Like a thesis advisor, he allows us to draw our own conclusions from the data we observe with him.

When I reached his discussion of paradise as metaphor, I expected him to reveal a Jungian understanding of the reality of the psyche and was not disappointed. He connects the Fall (from grace in Eden) with the "initial appearance of the ego," and shows us how our separateness, greed, and fear are byproducts of that great quantum leap of human consciousness, the development of the ego. How we will return eventually to paradise with our new ego consciousness remains our task for the present time, but Heinberg has shown us a new vision of that promised land.

To conclude his book, Heinberg leads us past the grave into the world of Near Death Experiences (NDE). He brings to this task the same comprehensive treatment that he brought to the paradise myths. Carefully building his arguments, he leads us to the startling conclusion that our visions and dreams of paradise may be memories of the future, imaginary (although real) visions of our spiritual reality as it transcends our momentary physical existence on earth.

A powerful book, it is a must read for serious students of myth, consciousness, and spirit.