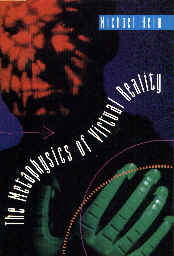 The Metaphysics of Virtual Reality
by
Michael Heim

To quote Heim, "Libraries may be . . . the last outposts of predigital intuition." If so, this may be the last book ever written about virtual reality, because all future dissertations will occur in cyberspace with eyephones and 3-D sound. Just slip the plug into your cranial jack and warp into virtual knowledge. To Heim virtual reality already exists and he deigns to communicate to us via the dead tree medium of books. So strap on your virtual eyephones and open the covers and prepare yourself for a roller coaster ride through the labyrinths of hypertext and cyberspace.

Heim brings a solid grounding in philosophy to this task of delineating the metaphysics of virtual reality. His knowledge gained from his translation of Heidegger's works and his detailed study of Plato and Leibnitz is obvious throughout the book. One fault is his seeming inability to separate map and territory, such as when he talks about, "the computer counterfeits the silent and private body from which mental life originates." As Korzybski would remind us, a counterfeit is always a map and the map cannot represent all the territory. And the territory is always changing, so any map is outdated the moment it is made. Ingenious cybernetic maps of bodies there may be, but the uniqueness of human beings will always remain one step away from becoming entities in Heim's or Gibson's cyberspaces.

What Heim does very well is to introduce the component pieces of cyberspace and their metaphysical aspects. What is hypertext and what likely impact will it have on our daily lives in the next twenty years? If someone offers to meet you in cyberspace, do you call a travel agent, NASA, or an on-line service? When all the phones begin ringing (as in the end of Lawnmower Man), signaling the beginning of a new unified hyper-consciousness, who you gonna call? Heim certainly asks many more questions than he answers, which is one of the charms of this book.

Some of the questions he does answer. One is what are the three hooks on the reality anchor that distinguishes our external reality from virtual reality? His answer is 1) natality (we are born), 2) mortality (we die), and 3) temporality (what Korzybski called 'time binding': we remember past happenings). These limits, he says, "impose existential parameters on reality, providing us with a sense of rootedness in the earth (a finite planet with fragile ecosystems)." I would agree with him, except I consider the earth to have a robust ecosystem, to be a robust planet, not a fragile one.

Another question he answers is the origin of the ubiquitous word, interface. He points to its origin in the ancient Greek word, prosopon, which originally meant one face facing another, or interface. He points out the independent nature of the interface, which is the relationship between the two faces facing each other (over a computer screen today), how the interface lives on as a third being. This nature of prosopon helped the Christians to describe the Trinity, as the Father and the Son existing together with the Holy Spirit as the interface between the two of them. The mystery of the Holy Spirit is consonant with the mystery of the computer interface in its derivative independent existence. As the "ancient term prosopon once glowed with mystic wonder" the term computer interface does for the neophyte on the Internet today as he or she gets lost in the World Wide Web. Instead of setting an alarm to go to work, they have to set an alarm to go to sleep -- an external world signal to bring them back to the exigencies of the everyday world.