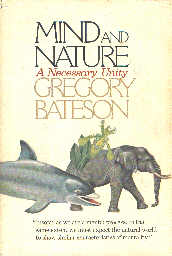 Mind and Nature by Gregory Bateson
A Necessary Unity
Published by E. F. Dutton in 1979
Book Review by Bobby Matherne ©2002

In this volume Bateson creates another "step to an ecology." He takes the reader through a comprehensive review of the principles of logical levels. Operating as he does on a higher lever than most people on the planet, he is difficult to follow at times, but his exposition is clarity itself, and I found myself understanding quite a bit more in this reading than in my original 1979 reading of his newly published book.

His review of Lamarckian versus Darwinian evolution is comprehensive, but one gets the feeling that he is echoing his famous biologist father, William Bateson, in his anti-Lamarckian view. Gregory explains the "dormitive explanation" early in the book. This phrase comes from the example of a physiologist who explains that the sleep inducing effects of opium are due to its containing a "dormitive principle." There are times in his discussion of evolution when he seems to be saying that evolution contains a Darwinian principle and not a Lamarckian one.

Bateson brings the insights of evolution and cybernetics into a potent combination that can provide new modes of thinking and interacting with the world that transcend the old Newtonian-Cartesian views so prevalent for over three centuries. He truly achieves the goal of the subtitle by leading us to see mind and nature as "A Necessary Unity."

One avoids Bateson's writings at one's own peril. No other American writer is so worth the pains of reading and understanding as he is.