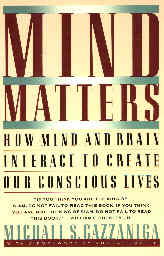 One of the premiere researchers of brain and mind function has compiled in one small book the insights from the latest experiments and studies on the human brain. Gazzaniga describes the experiments done on his split brain patients that first hinted at the left brain/right brain specialization of functions that has been a darling of pop psychologists in the past decade. In this book one can read of the early experiments written by an early explorer in the field.

The author devotes a large part of the book to discussions of how the brain does this (e.g., produces a feeling of sadness) or does that (e.g., produces a euphoric feeling). He creates thereby a picture of the brain as a master controller of a complex machine whose job is to react to chemicals and stimuli. This theme is elaborated in considerable detail as a pharmacopeia of endogenous chemicals is listed, giving their action-reaction cycles in series of complicated feedback loops. Only the "interpreter" in Gazzaniga's model humanity hints at the possibility of a "ghost in the machine" that does more than just react to chemicals. The possibility of "feed forward" signals produced by the mind is ignored by Gazzaniga - more as a defect or lacuna

in the experimental design than as a deliberate pattern. Scientists, even experimenters, tend to treat human beings as Galileo treated spheres and inclined planes, that is, as objects. Consideration of the "feed forward" loop, which Gazzaniga all but ignores, would cause him to recognize that the source of chemicals and the other reactions might come from the thoughts of the brain, i.e., that the brain might be the "creator" in addition to the "interpreter" and "master controller" of the body.

Can it be that life itself is "feed forward" all the way down?