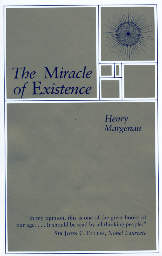 One of the miracles is the existence of this book. It is written by the author of one of my senior physics textbooks (c. 1961) and is undoubtedly a result of his collaborative effort with Larry LeShan on Einstein's Space and Van Gogh's Sky, a book I will take from my library to re-read shortly.

The Miracle of Existence covers a territory well-traveled by metaphysical and theological explorers but seldom by a physicist, especially in public, and Margenau does it without LeShan as a guide this time. The first chapter on the connections between the mind and physical reality is a big help for the novice explorers. In it Margenau establishes operational definitions for discussing the real world: how to separate perceptions, objects, and mental constructs from each other.

He discusses evolution and the existence of morphogenetic-like fields without specifically referring to Rupert Sheldrake's term, which seems a little strange. This is an oversight that the good physicist would never make when writing about physics. It would be like his trying to talk about the Heisenberg Uncertainty Principle without using either Heisenberg or Uncertainty. For example, in this book he points out the usefulness of "rules of correspondence" which are, in fact, operational definitions, the introduction of which concept he attributes to the philosopher-physicist Bridgmann.

Overall the book promised meat and delivered menu. The menu offered a visual splash of perennial philosophy stuffed into scientific pastry shells covered with toppings of Eastern metaphysics to create the effect of a Mondrian painting. Pretty as a picture, but who can eat it or explain what it means.

One repugnant tendency of modern science over the centuries has been to thrash someone's ideas in one century and a century or so later, suddenly find a way finally to make sense of the same ideas. The creatio ex nihilo tenet of Thomas Aquinas was regarded as absurd by the modern scientists of his time, and modern scientists of our time find it plausible that matter is created out of nothing in the theory of the Universe known as the Big Bang.

[page 131, For Insomnia] As far as I know the best remedy is a psychic one: convince the patient that the sleep he gets is all he needs.

Perhaps that is the message of this book for me: "The knowledge I have of this subject is all I need" and that I can safely avoid such books in the future.