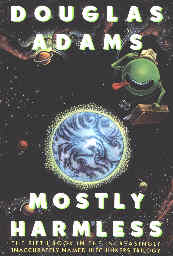 In one of the many other possible universes the Hitchhikers Trilogy ended with Book Three, but in this one it ended with Book Five, just as it started, with Earth being destroyed, but only after Arthur ducks a shot on Stavromueller Beta.

The book title comes from the review that Ford Prefect had done of Earth after fifteen years of research. The Guide had cut it to two words, "mostly harmless," which is more that can be said about the weird flapping bird, that know-it-all, that Ford found on the secret 13th floor of the Guide office building. But Arthur Dent has been busy upgrading to first class by trading fingernail clippings, scrapings from the inside of his mouth, and semen for his flights in search of a suitable planet. On NowWhat the local fauna became attached to him (bit him on the thigh) and prompted him to leave for a Bob-fearing planet where he could live a foolproof life making sandwiches for a living. But he had underestimated "the ingenuity of complete fools."

When his daughter, product of his flight upgrades and a ticking biological clock, shows up, Random, he tries to see things from her point of view, but he soon learns, "It can be very danerous to see things from somebody else's point of view without the proper training." Minimum of five year Master Practioner's license in NLP required, just to be safe.

Then Random gets the bird which tests her for the direction of time flow by giving her the answer to a question followed by the question. "Huh?"/"Okay, time flows that way." Her father, meantime (a word I use advisedly, giving the plurality of universes nearby), together with Ford Prefect hitchrides a wild ride on the back of a Perfectly Normal Beast stampeding in a thundering herd from one timespace warp at one end of a valley to disappear into the timespace warp at the other end of the valley. Entering the Domain of the King Bar and Grill they buy a pink spaceship with big fins from the King who treats them to a couple of songs.

So, before the mostly harmless planet is snuffed out again, we enjoy the King singing a reprise of "Love Me Tender" and "Don't Be Cruel."