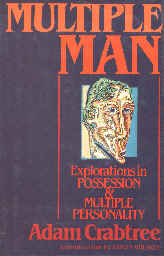 No study of Multiple Personality Disorder (MPD) would be complete without at thorough reading of "Multiple Man." Crabtree provides a historical overview of the behavior called possession including such items as how the Oracle of Delphi came into being. A noxious gas was emitted from a chasm into which many of the persons overcome by the gas threw themselves in the throes of ecstasy. The chasm was reduced to a small hole and a temple was built over it. Maidens breathed the gas and went into trances in which they talked for the gods, answering questions for the many curious who sought them out.

The heart of the book comes with the case histories of possession that Crabtree treated personally. The cases are organized by such titles as "Unwilling Victims" and "Willing Victims." We meet overwhelmingly evil spirits that must forcibly cast out. And we meet confused spirits who have wandered in a heavy mist for years after their death. One of these was a dead father who, unbeknownst to himself, was trapped in his daughter's body. When asked to examine his body, he exclaimed, "I'm female!" That helped to convince him that the voice he was hearing in the mist (Crabtree) was telling him the truth about his living in his daughter's body. Once he had received the full information about his status, he soon moved on into the spirit world.

The most dramatic cases were the two involving possession by living entities. In both cases these were sons possessed by the spirit of their living mothers who lived hundreds of miles away. Once the entity was made to realize the negative impact it was ;having on its son, it left the son, returned the mother, and the mother's life improved dramatically. All this happened with the therapist working only with the son and the inhabiting "mother-entity." The mothers both got well without apparent knowledge of their sons therapy. In another case a person felt immediate relief when a distant therapy resolution occurred. These examples make a strong case for possession by living spirits.

As Crabtree points out several times, the therapist need not believe that the possession is occurring in order for him to be effective. To treat the patient/entity's view of reality "as if" it were real is enough. In fact, it is an essential part of the healing process.