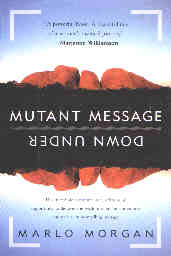 A READER'S JOURNAL, Volume 1
:
Mutant Message Down Under
by
Marlo Morgan
Discover the Wisdom of an Ancient Culture
Published by HarperCollins in 1994
Book Review by Bobby Matherne ©2002

The mutant down under is the author herself, who undergoes a three-month walkabout across the Australian Outback and creates this lovely story that restores the Aborigines to their proper role as the Real People of the continent.

Are the Aborigines untruthful and cowardly? Do they possess poor memory? Is their sense of smell undeveloped? Do they have no willpower? Do they suffer pain less than others? Do they have no works of art or history? During her trek the author debunks the myths held by newcomers to the Real People's continent.

The journey began as a jeep ride to what the author expected would be another rubber chicken lunch and an award presentation for her good works with the Aborigines. After a six-hour trip into the desert, she was deposited with a tribe of Aborigines outside a metal building and asked to don a simple garment for a cleansing ceremony. She watched as her clothes, gold watch, rings, shoes and undergarments were held over a fire by a woman of the tribe with a big loving smile on her face. She's cleansing them, too, she thought, and as she watched, to her horror, the woman dropped them into the flames. Part of her cleansing, it seemed, was to include complete separation from the artifacts of the mutants.

Then to her chagrin, after some preliminary comments about her passing the cleansing rite, the entire tribe, her jeep driver and all, began walking into the desert. With only the choice of trying to retrace the long jeep drive through trackless desert alone or following them into the desert, she set out with them on the walkabout carrying her only possession in the world at the time, a rock she had selected during the cleansing ceremony. A rock she was told, "may save your life ."

Walking in the desert barefoot in 110 degrees over thorny spinifex (beach grass), her feet became a bloody red mass in which the red-painted toenails seemed to disappear into the color of her feet. "Focus your attention elsewhere" they told her. She remembered giving similar advice in her healing ministry and followed it as best she could. At the first stop, one of the women applied some oils from native leaves and her pain eased. She slept on the ground, ate grubs, ants, crocodile, kangaroo, and whatever other food the region provided them in response to their daily prayer to the earth for food.

When the black flies covered her body, crawling inside her nostrils and ears, she felt herself going mad. The others just stood there and let the flies have their way. The elder of the tribe explained to her that the flies were cleaning the very crevices that she would need to be able to breathe during the hottest days of the desert sun, and to hear clearly. Without clear nostrils, she would have to open her mouth to breathe and would likely die from dehydration.

Slowly she began to grasp the wisdom of the Real People. One day she was told it is her turn to take the lead. She didn't feel ready to solo, but they made it clear that it was up to her. The tribe would live or die depending on the decisions she made in the next few days. For three days they traveled with no food and no water. Soon her throat refused to open and in desperation she asked inside herself for help. A voice said, "There is the rock." She placed the sacred rock, her only possession in her mouth. Soon moisture began to form in her mouth, and she could breathe again. Immediately thereafter she stumbled upon a pool of water and, as they drank joyously, a huge desert lizard walked by to volunteer for their supper feast.

They arrived at a secret cave, their destination, and she discovered the history of the Real People written on the cave walls in beautiful pictorial artworks. They admitted her into the crystal temple which was used for weddings and sacred rites. She read on the wall that the elder of the tribe, Regal Black Swan, was born on the same day as she was, on the other side of the world, and that they had been destined to meet after fifty years, so that she could become the messenger of the Real People to the outside world.

Whether one chooses to believe that this fictional account actually happened to the author or was pieced together from Aborigine folklore, one must accept that she has portrayed a powerful image of the powers of the original people of a great continent, powers that we can discover in the Real People in every one of us, if we dare to look within from now on.