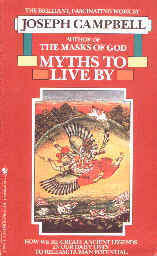 In this book, Campbell focuses on the myths that affect our lives on a daily basis: the Christian myths, Hindu myths, Buddha myths, Mohammed, Zoroastrian, etc. He shows convincingly that myths govern how we perceive the world and that they predispose our response to our perceptions so that our responses mirror those in the pertinent myth. He mentions how he had a Hindu United Nations clerk tell him that "whenever I'm in a new country I always study their religion. I've been reading the Bible from the beginning for several months and I can't find any religion in it." Campbell explained to him that he couldn't be expected to know that "reading the imagined history of the Jewish people" is considered a religious exercise here.

The author is well read and the sprinkling of unique quotes makes the Bantam paperback purchase worthwhile, e.g., Spengler, "If one has not the courage to hammer, he can expect to be used as an anvil."

Campbell mentions the "Way of Kitty, Way of Monkey": when scared the kitty "miaows" and the mother comes and rescues it; the monkey in the same situation jumps onto and clings to its mother's back (and is thus automatically carried to safety). Note the source of the rescue (kitty-external, monkey-internal). One can think of humans who fit the two categories.

The Chinese and Japanese have the identical ideogram for the concept of freedom. There is a subtle distinction, however; the Chinese concept is that freedom means "away from human nexus" -- the mountain peak with no one for miles around. This fits the popular American "get away from it all" craze. The Japanese concept involves the disconnection or freedom within the social group -- the one who can be in solitude in the midst of a crowd. This would correspond to the character, Mr. Miyagi, in The Karate Kid movie. Many of the problems of the United States today result from the closing of the frontiers that forced us to move from a Chinese to a Japanese style freedom. Campbell quotes Seneca, "The Fates lead him who will; who won't, they drag."