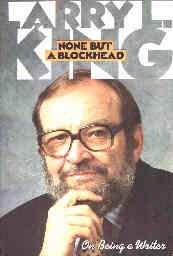 I am a member of the would-be writers class that King estimates to be "92 percent of the world's population." What is it to be a writer? is a question I asked myself many times as I embarked on my 55th year and full-time writing career. Somewhere in that 92 percent is me and somewhere is King - me the neophyte wannabe and he the veteran alreadyis. Something's the same in both of us. What's important here?

"I write to learn, as much as I write to tell or instruct." When I read theses words of King's, I re-calibrated my resolve to include "learn" in my writing endeavors. From now on I'm learning as I write.

" . . . write a letter of inquiry . . ." Once I learned from King the fate of unsolicited manuscripts in the hands of first readers right out of college, I re-calculated my copying expenses, since letters are much smaller than manuscripts.

"I recommend lawyers over agents." King recommends starting off with an agent and switching to a lawyer once you're established in the business. Good advice for avoiding giveaway contracts.

Part Two of Blockhead consists of "Random Jottings" -- a welcome sea change from the autobiographical gushings of Part One. Well into the Jottings, one finds more gushings, just not in chronological order, more like barroom stool order, since the shorter stories resemble bar stool jokes I heard in recent years. Likely the jokes originated with King. The longer stories deal with such staid dignitaries as William Styron, Jimmy Carter, Norman Mailer, and Jerry Jeff Walker. How Walker finally became sober, Styron always was, and Mailer never did.

King points out how Mailer's God could play a trick on a condemned man by causing a power failure just as the switch on the electric chair was to be thrown, but that Styron's God would never play a trick, but would show up at the funeral sighing deeply. Such stuff from the imagination of the author of The Best Little Whorehouse in Texas and The Kingfish fills a book whose subtitle might well be, Real Writers Never Eat Quiche. A wonderful book to be savored to the very end, when we learn what happened on That Terrible Night Santa Got Lost in the Woods. The eyes of young writers will glimmer with envy, the eyes of older writers with tears.