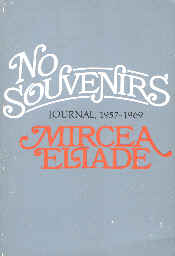 
My daughter once asked me if autobiography is the story of one's car. These journal notes by Eliade come close to autobiography by detailing the daily thoughts of the man. Eliade is an expert on comparative religions and had long conversations on the subject with many famous men of letters in the period 1957 to 1969: Carl Jung, Paul Tillich, Borges, Saul Bellow, Gasset, Paul Ricoeur, Michael Polanyi, Erik Eriksen, and others. He met them in Chicago, Paris, Mexico City and assorted other locales.

Eliade can discern paradoxes with the best: Greeks who loved the flesh had the survival of the pure intellect as an ideal; Christians who have an ascetic scorn for the body insist on the resurrection of the body; and Freud who boldly gave a conscious explanation of the unconscious. "There is a mystery in this," Eliade says.

On the humorous side, he quotes E. Heller, who claimed that 75% of Northwestern University's student body who were undergoing psychoanalysis suffered from "repressed chastity." (Reminds me of my previous wife.) And the lady whose wax nose job melted into her coffee - did she drink her nose, I wonder?

Eliade points out such trivia as the meaning of "camellus" including both a type of sailor's rope as well as a camel - thus the difficult of a camellus going through the eye of a needle has another interpretation. (At times that quilting thread we use seems as big as a sailor's rope when I'm trying to thread the needle.) Even so, I lean towards the entrance ways in old walled cities that were called needles and how difficult it was for a loaded camel to get through the eye of the needle of those needles. Seems one has to unload those heavy material goods and crawl on one's knees to enter heaven.

In another insightful story, he tells of a five minute film designed to help eradicate mosquitos in Africa. A simple and direct film, it showed a man collecting metal cans with mosquito-breeding water in them, emptying them, filling in ditches, etc, all typical of mosquito control procedures. When the film was shown to an entire village in Africa, an interesting thing happened. They quizzed the viewers afterward about what they had seen, and they said they saw a flying chicken - that's all. Puzzled, the Western film-makers carefully reviewed the film and sure enough, for a brief flash of time, a chicken flew across the corner of the screen! But it was the only living thing in the film and all that they understood of its message.

Freud is urban and Jung is rural, Eliade point out. Sex plays little part in rural cultures, and sexuality for otherwise desacralized, urban populations represents the last source of the numinous. Australians go on "walkabouts" - a concept that Westerners might think strange and a waste of time. But James Joyce's Ulysses involves Bloom going on a walkabout.

[page 181] But James Joyce returns to the monotony of the wanderings of Australian Heroes, filled with religious significance. We are filled with wonder and admiration, just like the Australians, that Leopold Bloom stops in a bistro and orders a beer.

Reading Eliade's words here after a thirteen year space of time, it reminds me why for a while after reading this, when folks asked me for the meaning of the Chinese Christ symbol I wear around my neck that I told them it meant, "I'm here for the beer."