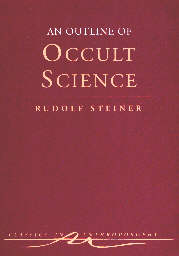 A Book Review by Bobby Matherne ©1996

What is Occult Science? Here is Steiner's definition:

Occult Science is the science of what occurs occultly insofar as it is not perceived in external nature, but in that region towards which the soul turns when it directs its inner being toward the spirit.

With this definition he creates a science of the occult, a science with realities to be probed by instruments and reports of findings to be published. In sensory-based science the human effect is carefully weeded out so that the findings are based on instrument readings, devoid of human bias or interference. In occult science the human is the instrument. Steiner carefully explains how the human being with its newly developed ego is the most intricate, delicate instrument for observing the realm of the spirit, in fact it is the only such instrument available. Scientists who claim their instruments have never recorded the presence of a spirit world, are using the wrong instruments. They are much like the establishment scientist of Giordano Bruno and Galileo's day.

Does this sound a little like the scientists of today? How might they respond if one said, "Your human body is the only instrument for viewing the dimensions of the spirit that you claim does not exist. Won't you look through this human telescope to view the spiritual dimension?" One can only surmise as defiant a response to this exhortation as Criminino vented in his day. No one who has read Steiner's works could possibly claim that his subjective reports of a spiritual dimension are delusions of a weak or suggestive mind. If the human body is the only instrument capable of exploring the spiritual dimension, then all such reports must be subjective, but that doesn't make them un-objective. Steiner describes how to tell the difference between reality and delusions in viewing the spiritual world.

On page 29, Steiner develops an early concept of time binding some twenty years before Korzybski published his book, Time Binding. Both scientists point to a capability in humankind that does not exist in animalkind, which Steiner calls the ego and Korzybski calls time binding. In the simplest terms time binding is the human capacity for memory that transcends the sensory reflex responses of animals. Animal "memory" is a conditioned response to an original sensory response whereas human memory transcends the sensory realm. Humans can respond to things that only exist in their minds, such as memories of events from years ago.

On page 52, Steiner suggests the existence of what Rupert Sheldrake calls morphogenetic fields (i. e., the word prototypes in the following quote):

In the astral body reside the prototypes according to which the ether body gives form to the physical body.

On page 114, Steiner states that the physical body is the most perfect body, an assertion I found counter-intuitive when I first encountered it, until Steiner explained the rational. Steiner's rationale follows in this quote in the book:

Of the present four members of the being of man, the physical body is the oldest. It is also the member that, in its own way, has attained the greatest perfection.

One of the consequences is that physical illnesses result from mistakes in the astral body that, transmitted to the ether body, end up creating disharmony in the physical body. This explains how healing of the spirit can heal the body and how only healing the body through drugs which mask the symptoms can cause further problems elsewhere in the body.

On page 317, Steiner points to the importance of reverence to the opening up of new worlds. A student must work on himself and have faith that his powers will increase, Steiner might say, and then add

If he achieves correct feelings in this direction he may say to himself, "In me there lie hidden forces and I can draw them forth from my inner being. Therefore, when I see something that I must revere because it stands above me, I need not only revere it, but I may hope to develop myself to such a degree that I become similar to what I revere."

On page 363 Steiner brushes away the cobwebs of obfuscation from the free will versus predestination debate:

Whoever believes that human freedom is not compatible with foreknowledge and predestination of the future condition of things, should consider that free human action in the future depends just as little upon the character the predestined things will have as this freedom depends upon his resolve to live in a house a year hence, the plan of which he determines today.

This is Steiner's Masterwork in my opinion and it requires concentrated study. I spent four months reading it — taking breaks at times to digest the ideas and to write poems that were inspired by the text. Comprehensive in its scope, Occult Science covers all of Steiner's material in one volume, but that does not mean one should start a study of Steiner with this book or restrict one's study to this book. Without some preparatory study of Steiner, one could easily be put off by the claims that Steiner makes and stop reading the book. My suggestion is to acquire this book early in your study of Steiner and read it late. In 2003 I revisited this book and began an in-depth review of it. You can read it here. It is a good place to go if you're not sure you want to tackle the entire book at this time or not. It can also be useful if you have already read the book at the start of your studying the spiritual science of Steiner and are not sure what the importance of this book is.

Note: the entire contents of this book may be read on-line at: eLib version of Occult Science.

See the following reviews for elaborations on the information contained in Occult Science:

Spiritual Hierarchies and the Physical World by Rudolf Steiner

The Archangel Michael — His Mission and Ours by Rudolf Steiner.