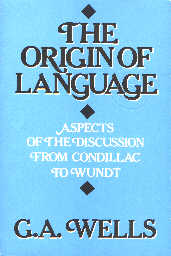 A READER'S JOURNAL, Volume 1
:
The Origin of Language
by
G. A. Wells
Aspects of the Discussion From Condillac to Wundt
Published by Open Court Press in 19878
Book Review by Bob Matherne ©2002

In this survey by G. A. Wells on the origin of language, the author goes back several hundred years and devotes a chapter to each major contributor to the field. Condillac, Wundt, Chomsky, Herder, Rousseau, and many others are quoted and analyzed. Following these, Wells gives his view of the origin and development of language.

Was language invented or did it evolve like parts of the body? If we claim language was invented, we must postulate a plausible transition from no language to some language. From that logic came the theory of the origin of language as gestures, then sounds accompanying gestures, then finally just sounds without gestures. Wells quotes William James in this regard to the effect that every voluntary action was in the beginning an involuntary one. Once performed, the actions may be voluntarily recapitulated at the will of the actor. Thus the gesture language began as natural hand/body movements associated with an action, such as bringing a hand to the mouth to imitate an eating process, even though no food is in the hand. Someone else sees the involuntary movement, interprets its meaning as "I'm hungry" and offers food to the actor. The actor, gratified to receive the food, can later recapitulate the gesture when hungry. The newly acquired action, if a universal gesture for eating, will be quickly recognized as such by all other actors. If the gesture is not universally recognized, it will be taught to all of the population of actors, if it is a useful gesture. The sound "food" made by one actor while triggering the gesture for eating can later be repeated without the gesture and thus the word for "food" can be created. This gesture origin of language is attributed to Condillac.

Wells points out the difference between the ergone, the fixed spoken word and energei the living action of speaking. In our society the adults teach the children ergone and the children speak energei, always creating new words to confound the adult's fixed ideas of language. Thus our children may be closer to the process of originating language than the adults.

Wundt points out that the sound used to form a word generally has some connection in the sense that the movements to make the sound can call attention to the meaning of the word. Simple examples of this are the words given to parts of the face. Say 'tongue' and your tongue moves. 'Nose,' 'cheek,' 'forehead,' 'eyebrow,' and 'ears' also have a similar effect.

In all, an excellent overview of the origin of language.