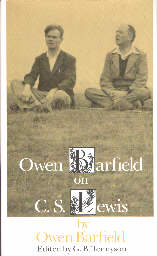 Through the eyes of a life long friend we see three faces of C. S. Lewis: the literary critic, the fiction writer, and the Christian apologist. Barfield says this collection could be entitled, "Opposition as True Friendship." Notably the opposition and friendship survived its greatest trial in their "Great War" where OB and CS fought over the nature of imagination: was it the vehicle of truth as Barfield averred, or was it simply a desirable and pleasurable experience of the soul as Lewis claimed? OB says Lewis treated the imagination as men treated Victorian women: they protected them, adored them, and put them on a pedestal. He says that Lewis was in romantic love the imagination but Barfield himself wanted to marry it. This is as cogent a description of their differences as can be found.

Obviously the two friends influenced each other greatly over the many years of their association, through letters, conversations, and long walks in the country. OB claims that Lewis did most of the changing over the years not he - that he still maintains the same convictions that he did as a youth during their early debates. Barfield was the champion then of the role of the unseen unconscious in the soul of man and remains so today. He continues to value and promote the objective reality of the imagination much as Carl Jung promoted the objective reality of the psyche. One is tempted to think that these two seminal thinkers were talking of the same underlying realities from a slightly difference perspective. As for Lewis he wrote the most imaginative children's books in the Narnia series, but refused to discuss with Barfield any theory of imagination. In a sermon he preached in 1949, however, Barfield presents evidence that Lewis in discussing "transposition" is actually presenting a theory of the imagination without ever using the name.

This book is valuable for its insights into the multi-faceted character that C.S. Lewis presented to the world of letters and Barfield does a fine job of presenting them to us.