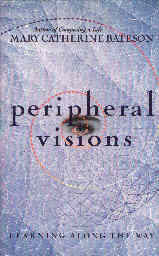 Focusing on the pursuit of particular, narrow goals, we pay attention to a fraction of the whole, block our peripheral vision, and act without looking at the larger picture.

In this book the daughter of Margaret Mead and Gregory Bateson invites us to tour several countries with her and to open up each our peripheral visions to see new wholes where mere fractions existed before. The central metaphor she uses is that of the five blind men and the elephant, each of which experiences a different reality, a snake, a tree, a wall, etc. She suggests that one present each blind man with a small puppy so that he might feel the tree (leg) of the puppy and then move his hands over the entire body of the dog to experience the "pattern that connects" the parts to a unified whole.

In a passage that encourages us to use our peripheral vision, MC recalls what a friend had told her when she was complaining about the major changes of activities in her life:

. . . although I had changed my major activity repeatedly, I had always shifted not to something new but to something prefigured peripherally, an earlier minor theme, so that discontinuity was an illusion created by too narrow a focus and continuity came from a diverse fabric and a broader vision.

MC says that her father disliked experimental psychology and once asked a person who studied rats in mazes, "Since rats are nocturnal creatures, have you considered running your experiments at night?" The researcher said, "Yes, but they bite." So Gregory came to understand that psychology's research is based on the testing of how groggy rats find their way through mazes. MC, mimicking her father, draws an analogy between the groggy rats finding their way through mazes and the kids in grammar and high schools that are bored to tears by the usual forms of teaching and pull themselves groggily through each day's classes.

On metaphors, MC notes how scientists disdain the usage of metaphor in technical publications, but pepper their normal discourse with them She adds:

The solution is not to purge metaphors from speech and try to ignore them; the solution is to take responsibility for the choice of metaphors, to savor them and ponder their suggestions, above all to live with many and take no one metaphor as absolute.

As we follow her metaphorically to the Sinai Desert, to a rural Filipino village, or to downtown Teheran, we are like the blind men experiencing some appendage of an unfamiliar world. She leads us to 'identify divergent premises . . . and to accept a broader or more ambiguous view than common sense," in other words, to view the world with our eyes wide open, attending to each, our peripheral visions.