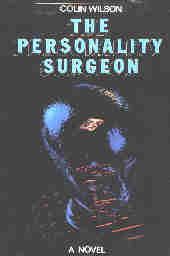 General practitioner in London health service, Charles Peruzzi, MD, goes to a conference and meets a brain researcher, Topelius, from Sweden who plants a suggestion that personalities can be surgically altered. Charles begins to observe the expressions of people's faces and decides that perhaps people don't really know what they look like and that, if they did, they would act differently. The problem as he sees it is "how to create such a mirror?."

The book is a sequence of therapeutic maneuvers that Charles performs (some consciously with pre-planning and some brilliantly intuitive - unconscious planning) on various acquaintances and clients.

The first case is a retired businessman who was incurably depressed until he saw his daughter drive off into a canal and nearly drown. Charles attributed his subsequent recovery to the recharging of a vital force that had been dissipated by his retirement. He sets about trying to recharge neurotics with a vital force using a technique called personality surgery.

The next case was a self-conscious woman who limited her social interactions by her exaggerated perception of her slight facial tremor. After Charles told her that the facial tic could be easily removed surgically, she brightened up, changed her life, and the need for surgery disappeared. By removing a fear from her personality, he had removed the need for physical surgery.

He rescues the son of a millionaire from self-destructive behavior by helping him to identify with Paul Morphy, the great chess champion. His reward is a laboratory full of computer and video equipment that he uses to produce "doctored" videos of interviews in which facial plastic surgery was done via a paintbrush program. The video surgery produced genuine smiles in place of pained pseudo-smiles, and when the person viewed the edited interview, although unaware of the changes made to their faces, they learned to mimic the genuine smile and subsequently their life began to change for the better.

Alter one part of a system and all parts begin to respond differently. The person, if they like the new responses, ratifies the change in themselves and assimilates it as a part of their personality. In a nutshell, personality surgery. It is reminiscent of what Milton Erickson, famous hypnotherapist,did with just his voice and his wits to thousands of patients for over 50 years.