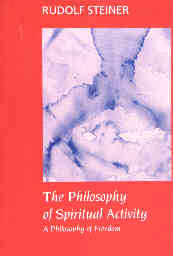 Intuitive Thinking As a Spiritual Path by Rudolf Steiner
(originally, The Philosophy of Freedom)
Translated by Rita Stebbing, 1988
Published by Rudolf Steiner Press, U.K. in 1992
Book Review by Bobby Matherne ©2002

In this small volume Rudolf Steiner lays the epistemological basis for Ralph Waldo Emerson's essay on Self-Reliance that had been written some forty years earlier. This book, rightly known, provides a sound philosophical basis for the writings of Ayn Rand on capitalism and the teachings of Dr. Andrew Joseph Galambos on volitional science, and many other writings and teachings of our time.

Alex Keller, my first metaphysical teacher, liked to start off his basic course with the question, "Why did you come here?" No matter what your initial answers, he soon led you to know that you had come there "because you love yourself". What Steiner does is to provide the philosophical underpinnings to justify my teacher's line of questioning. Rightly understood, the reasons we do things come from deep within us, from an ever-flowing spring we call intuition, when we dip into it.

What I mean above by "rightly known" and "rightly understood" is carefully explained by Steiner in the first half of this book, so carefully explained that the going is imponderably slow at times, like a trek through a swamp. When we finally reach high ground in Chapter Nine, The Idea of Freedom, he begins by using Kant's categorical imperative to destroy itself (p. 104):

Kant's moral maxim says: Act so that the principle on which you base your action may be valid for all. This maxim spells death to all individual impulses to act.

Steiner's point is that the use of such a maxim, by destroying the individual impulse to act, cannot be valid for all, and thus Kant's maxim must be invalid. If one restates Kant's maxim as follows, a more salubrious result ensues: "Act using a process such that all would be better off if all used the process." Stated thus, one can see that, rightly understood, the world would be enormously better off if everyone used Steiner's process of freedom.

The process referred to above, Steiner's process of freedom, is the process he calls intuition, and it will require a lot of intuition for you, dear Reader, to rightly understand from my paltry words what Steiner uses an entire book to explain. Here are some selected quotes, a mere glimmer of what awaits in the treasure trove of the book:

p. 100: The highest level of individual life is conceptual thinking without reference to any definite perceptual content. Here the content of the concept is derived, through pure intuition, from the conceptual sphere itself.

p. 101: When we act under the influence of intuition, then the driving force of our will is . . . practical reason . . . that is, an impulse to action springing directly from intuition.

p. 102: It signifies moral progress when a person does not simply accept the commands of an outer or an inner authority as motives for his actions, but strives to understand why a particular principle of conduct should motivate him. This is to progress from morality based on authority to conduct based on moral insight.

p 105: General standards always presuppose concrete facts from which they can be derived. But facts are first produced by human action.

And what if criminals acted this way, justifying their vile acts as intuition? By asking that question you have betrayed a lack of understanding of intuition which may require a complete reading of his book to set right. Here's a bit of what Steiner says on the question:

p. 107: But the blind urge that leads to crime does not originate in intuition and does not belong to what is individual in the human being but to what is most common in him, to what is the same in all.

In so far as the reason for an action springs from the spiritual aspect of my individual nature it is felt to be free; in so far as it is carried out under the compulsion of natural instincts or because of an obligation to moral standards it is felt to be unfree.

p. 108: A moral misunderstanding, a clash, is out of the question between people who are morally free. Only one who is morally unfree, who obeys bodily instincts or conventional demands of duty, turns away from a fellow human being if the latter does not obey the same instincts and demands as himself.

To live in love of action, and to let live in understanding of the other person's volition, is the fundamental maxim of free human beings. They know no other ought than one with which their volition is in intuitive agreement . . .

p. 109: A free individual does not demand agreement from his fellow human beings, but he expects it because that is inherent in human nature. This does not point to a necessity for this or that external arrangement, but to the disposition, the inner attitude, through which a person, experiencing himself among fellow human beings whom he values, does most justice to human dignity.

p. 112: A free person acts morally because he has a moral idea; he does not act morally for the sake of morality. Human individuals, with the moral ideas belonging to their nature, are the prerequisites of a moral world order.

p. 116: Indeed each individual pursues his own particular aims, for the world of ideas does not come to life in a group, only in individual human beings. What appears as a common goal is in reality the result of the will impulses of the individuals, usually of a few who are outstanding and whose authority the rest follow.

A rose's seed cannot become a rose by stealing genetic material from its surrounding wheat kernels or acorns. And yet that is the essence of theft: to take from someone else what, rightly understood, can only come from your inner self, your intuition. A rose seed who steals will only delay its blooming into a rose. A rose can only bloom in freedom, in a land of the free, by the free, and for the free.

"The Philosophy of Freedom" is available for reading on-line.