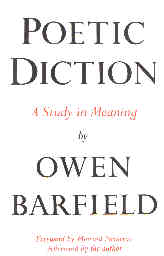 In this classic book on the theory of poetry, Barfield explores Kant's, Locke's, and Hume's philosophies to arrive at his personal theory of the evolution of consciousness as shown by the evolution of language and poesy. He agrees with the view of language as "dead metaphor" which poets bring to life by some new turn of phrase or juxtaposition of words. It is the poetic imagination that is the font of creativity in which language was first born and the same font in which grow new meanings in the perennial expansion of consciousness.

As in his other books, Barfield explains his view (from Rudolf Steiner) that it is a mistake to read early writings in history with our current understanding of language. Our consciousness and language have grown so much, the argument goes, that only with a primitive mind can we read and understand primitive writings. And it is only by the creative use of the imagination that we may take on the primitive mind.

In the modern age where man has grown apart from nature in a severe dichotomy of linguistic subject and object, Barfield continues to re-remind us at every turn that the subject-object distinction is a linguistic one - one not present in nature but only in our way of talking about nature. That the oneness with nature, which is the participation mystique of primitive folk, is the source of inspiration via ineffable experiences of nature and is fed into the split-off consciousness of modern man by the artifice of poetry.

Thus we see poetry as an object that de-activates in the subject-reader the subject-object distinction and produces a reunion, however brief, of the reader with the ultimate reality of nature.