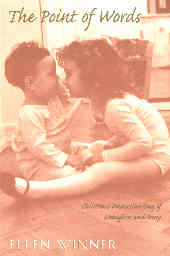 A READER'S JOURNAL, Volume 1
:
The Point of Words
by
Ellen Winner
Children's U nderstanding of Metaphor and Irony
Published by Harvard University Press in 1988
Book Review by Bob Matherne ©2002

When Mrs. Casey told me, "I have a bone to pick with you," my thirteen year old mind pictured some fried chicken we were about to share. Since it didn't make any sense that my newspaper route boss was going to eat chicken with me in her car while she was driving, I asked what she meant. I forgot what problem she referred to, probably some missed newspaper customer, but I've always remembered my baptism into the world of metaphor: words suddenly became more mysterious to me again.

Definition of vehicle, topic, and ground is best done by example. From Shakespeare: "Juliet is the sun." Juliet, as Winner points out, is the topic, sun is the vehicle, and the ground is the qualities of warmth, centrality, brilliance, etc. In the process of a metaphor becoming a word, the vehicle is used so often to evoke the un-named topic that the vehicle becomes its name, i.e., becomes the word-name of the topic.

The first half of the book deals with the meta-cognitive development of very young children (under seven or so), with how they come to understand metaphor and irony. Winner relates that "Comprehension of proportional metaphors ... emerges only at adolescence..." Thus "the butterfly is a rainbow" would not likely be understood by someone under the age of ten. In the second half she investigates the development of the understanding of irony as children grow older. Her examples of tests to evoke understanding of belief, truth, deception, and irony would be very useful for experimenters in the field.

If "ontogeny recapitulates phylogeny" in the realm of cognition, we can expect to find that as a human being grows older, he moves individually through the stages of cognitive development through which humans have progressed over eons of historical time. Thus, Winner and others in their studies of child development are doing archaeological excavations of humankind's cognitive development and evolution of consciousness.