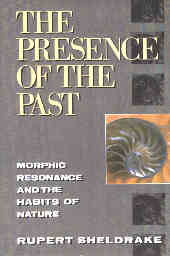 A READER'S JOURNAL, Volume 1
:
The Presence of the Past by
Rupert Sheldrake
Morphic Resonance and the Habits of Nature
Published by Times Books in 1988
Book Review by Bobby Matherne ©2002

In this comprehensive followup to his "New Science of Life," Rupert Sheldrake continues to develop the morphogenetic field of his original concept of morphogenetic fields. These are fields that he postulates form around living organisms at all levels of existence. These fields, through resonance with like structures elsewhere in the world and with the physical component of the organism itself, allow widely scattered organisms to evolve in similar ways. This concept of "morphic resonance" provides explanations for behaviors otherwise inexplicable through the "matter-only" view of evolution held by Neo-Darwinians.

Anyone who has seen the dramatic Kirlian photograph taken of a leaf with a piece gone will be puzzled and amazed that the structure of the leaf is visible in the part of the leaf that was removed. This photograph cannot be explained by the materialistic reductionists whereas the concept of a morphogenetic field provides a ready explanation.

Anyone who has read Carlos Castaneda's Don Juan books has encountered the "luminous egg" surrounding human beings that Don Juan can see and Carlos initially cannot. This luminous egg may well be a visual effect of the localized morphogenetic field of a human being.

Ready explanations of concepts from atomic structure to galaxy formation, from genetic inheritance to tribal rituals, from crystal formation to the hundredth monkey effect are provided by the concept of morphic resonance of morphogenetic fields. The elan vital, the vitalists, entelechy, Lamarckian evolution, intuition, collective unconscious, archetypes, myths, and numerous other disparate concepts are collected under Sheldrake's meta-umbrella of morphogenetic fields. If your parade has been rained on lately by matter-only reductionists and narrow-minded anti-metaphysics pedagogues, a formidable shelter is available between the covers of "The Presence of the Past."