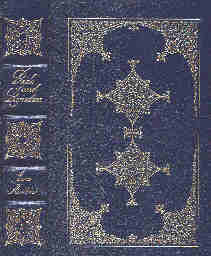 A READER'S JOURNAL, Volume 1
:
Pride and Prejudice
by
Jane Austen
Published by The Easton Press in 1977
Book Review by Bobby Matherne ©2002

Miss Austen weaves this tale of Elizabeth, Jane, and their three sisters - how these Bennett sisters, for lack of a brother to duly receive the family's entails (house and property) upon their father's death, are pushed and pressured into various liaisons. The various suitors, Mr. Collins (the entailed cousin), Mr. Darcy (the haughty snob), Mr. Bingley (the luscious prospect), Mr. Wickenham (the Janus-faced paramour) parade their well packaged wares in a variety of balls, dinners, card games, and walks around the grounds of several large estates. (Didn't these people ever work?) Jane falls in love and inexplicably loses her love (till the denouement). Liz rejects several suitors as unsuitable (?) and one of the rejects elopes with Liz's younger sister in a scandalous fashion. The scandal, however, is descandalized by money and rituals in such an expeditious manner as to inform one of the raison d'etre of scandals in that period of history. Once the grooms debtors are all paid and the wedding ceremony performed, the scandal is erased as though it never existed.

The major thrust of this novel is the meanings of Mr. Darcy's behavior and character as these meanings are created by the various characters at different points in the story. From proud and prejudiced to sensitive and caring , the general opinion of Mr. Darcy progresses. Austen develops Mr. Darcy's character in the discussions between the sisters, Mother Bennett and the sisters, Mr. Wickenham(disgruntled and disinherited friend of Darcy), minimal conversation between Jane and Darcy (didn't people just talk to one another then?) and finally a long letter from Darcy to Jane in which the general opinion of himself and Mr. Wickenham are reversed - a masterpiece of penmanship and scholarship, to be sure.

Typologically speaking: in that time the men did the thinking, the women took care of the feelings and relationships (men never discussed relationships of a feeling nature - only pecuniary relationships - with their thinking function). It was only on the dance floor that the two sexes met for some sensate communion (before marriage).