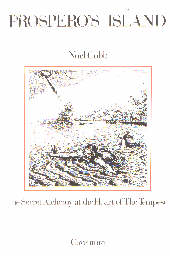 A READER'S JOURNAL, Volume 1
:
Prospero's Island
by
Noel Cobb
The Secret Alchemy at the Heart of The Tempest
Published by Sigo Press in 1989
Book Review by Bobby Matherne ©2002

Who of us has not sometime left the mainland consciousness and found ourself shipwreck on an island as the result of a great storm? "My land is across this sea," we may have thought. Milan was the land of Prospero, it was a land he was tricked out of and it existed across the sea of unconsciousness that separated his island from mainland consciousness. Prospero rules over this island — the winds and spirits answer his beck and call with a gusto. The Tempest is brewing in an alchemical cauldron, stirred by the master conjurer himself, Shakespeare. In this, his last play, he creates a virtually bottomless pit for depth analysis. No matter how deep Cobb analyses the structure of "The Tempest," you feel that there is even more.

On one level the play is an allegory of the process of alchemy. On another level it is about the process of individuation in Prospero, who develops his inferior sensate-feeling function during the course of the play, regaining with his inferior function the land he had lost by his concentration on his superior intuitive-thinking function.

Everything in this play shimmers with energy and aliveness: Prospero, the weather, the spirit — Ariel, the monster — Caliban, and the lovers — Miranda and Fernando. Prospero is the major domo who directs the strutting and fretting on the stage by means of Ariel and his other helpers.

A success in the crucible of alchemy produces a happy ending for the good guys who find mates or regain their lost possessions. Even the monster Caliban and his cohorts (who plotted to murder Prospero) are forgiven in the end and are allowed to live out their lives.

In his most famous speech, Prospero says:

Our revels now are ended: these our actors,
As I foretold you, were all spirits, and
Are melted into air, into thin air;
And, like the baseless fabric of this vision,
The cloud-capp'd towers, the gorgeous palaces,
The solemn temples, the great globe itself,
Yea, all which it inherit, shall dissolve,
And, like this insubstantial pageant faded,
Leave not a rack behind: we are such stuff
As dreams are made on; and our little life
Is rounded with a sleep.


Sir, I am vex'd;
Bear with my weakness; my old brain is troubled!
Be not disturb'd with my infirmity.
If you be pleas'd, retire into my cell
And there repose; a turn or two I'll walk
To still my beating mind

Charlton Heston quoted the doubly indented portion in his goodbye speech announcing his Alzheimer's on August 9, 2002, perhaps one of Heston's greatest speeches in a life of great speeches. He was playing Charlton Heston taking his final bow on the stage of life.