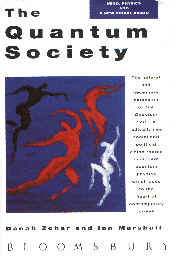 The Quantum Society
by
Danah Zohar and Ian Marshall

In this follow-up to her Quantum Self, Danah enlists her husband as co-author to extend to the level of society, the quantum principles she had applied to the Self. The authors claim that this new social reality they describe must have the following features:

1.) Must be holistic — where any part affects another part. As Jean Houston says, "we have leaky margins."

2.) Must transcend the individual/collective dichotomy — where individualism and community goals merge.

3.) Must be plural — where we accept that "all meanings are true," for the person who holds the meanings. (Matherne's Rule: AMAT)

4.) Must be responsive — where society becomes a living machine "designed to cope with ambiguity and creative challenge."

5.) Must be bottom-up or emergent — where front-line citizens make the decisions, not top-level bureaucrats.

6.) Must be ecological — where humans are recognized as part of nature and treat nature as part of themselves.

7.) Must be spiritual — where we seek spiritual answers to basic questions of life and society.

8.) Must be in dialogue with science — where we replace the outmoded Newtonian mechanics billiard ball model of social interaction with the newer, holistic, all-at-once quantum mechanics understanding.

The last item, the dialogue with science, is the major theme of this book. The authors state the basic premise of their approach succinctly on page 10:

If we are to rediscover the moral and spiritual roots of our society, we must do so in a way which mirrors, which extends and develops rather than contradicts, the knowledge that science is giving us about the nature of the physical and living worlds of which we are a part.

A central metaphor that appears in the book is the dance. When a group of people participate in a dance, something new emerges that is more than the individual participants. The dancers acquire a new identity, but only at the sacrifice of some indeterminate potential for individual action. And yet the dancers need the dance to become fully themselves, and the community emerges from the dance of the individuals that comprise it.

The Chapter titled The Self, the Vacuum, and the Citizen shatters the commonly held view of vacuum as nothingness. In quantum mechanics the vacuum is better called a plenum — it is the source and the sink of all matter and energy in the world. Think of the vacuum as a city street that seems empty except for an occasional pedestrian or passing car. We can focus on the emptiness of the street or the transitory occupants. The vacuum is like that same street at 8 am when the streets suddenly fill with people — appearing from nowhere and disappearing again into nowhere (as they enter buildings to start work). Objects appear in the vacuum and disappear with a regularity that is predictable by quantum mechanics.

When we expand the Bose-Einstein Condensate to cover groups of individuals in a culture, we have created the dance of society. Society can then be seen as the emergent properties of the dance of individuals that suddenly appear on the streets of the universe, dance for a time, and disappear again. Culture is the name we give to the collection of dances that we have deemed important enough to be re-learned, re-enacted by each succeeding generation.

One cannot read The Quantum Society and continue to treat society as a collection of objects bouncing against each other like billiard balls. One comes to see that when one learns a new dance in one's individual life, it affects other lives and the dance changes, not because someone hit a bank shot with the cue ball, but because the very nature of the billiard balls has changed, and the old game of ricocheting reality has been replaced by a new game in which the balls dance, and evolve during the course of their dance.