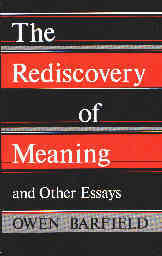 This volume collects Barfield's articles and speeches around the theme of meaning. The individual contents of the chapters are diverse: from "legal fictions" to "Psalms of David," from Carl Jung to Immanuel Velikovsky.

In each chapter we find Barfield's major theses repeated: consciousness evolves over time and that requires researchers of history to de-evolve their conscious processes to understand the world of the past. This "de-evolution" of consciousness requires considerable imagination and Barfield calls the process "historical imagination."

[page 182] In other words there is mind of which we are unconscious as well as mind of which we are conscious. And, since we do not consciously devise qualities, it must be the former which is responsible for those qualities which we classify as subjective, but which look so very much as it they actually belong to nature. Nevertheless we must not speak of any mind or intelligence in nature.

In the last sentence is the 'Great Taboo' as Don Cruse and Robert Zimmer call it in their book, Evolution and the New Gnosis(2002). The Great Taboo of science is a prohibition against suggesting in any way that spiritual beings or intelligence exist in the material world, what science presumptuously calls nature. This taboo was begun in earnest by Francis Bacon of Verulam and continues in force to this day, up until now. You cannot be a scientist and violate this taboo. Owen Barfield not only violates it but shows the folly of the taboo.

I wrote in the margins of my copy of The Rediscovery of Meaning the words "See Any Intuitions?" a poem from my book, Flowers of Shanidar, which is quoted in full below:

As Hazrat Inayat Khan has said,

If we want to load a program into our computer
We need a program loader program.
That's reasonable and logical.


But how does the program loader get loaded?
Any intuitions?

How does this parallel the development
of Reason and Logic?
Any intuitions?

Intuition is our wired in (or fingered in, by God)
Bootstrap program
which provides the direct knowledge
That can load new loading programs such as
Reason and Logic.

Thus at the base of scientific knowledge,
Which explains everything we see,
Lies a technology we cannot see in action
but only its results.
And when we do, we scientifically create
A reasonable and logical explanation.

Does this give us a complete answer?
Any intuitions?

Barfield points out the absurdity of attempting to bridge matter and spirit using science. Science is based on sensory perceptions and it is sensory perception itself that is the gap between mind and matter. The only workable way to bridge the perceptive gap is imagination. The imaginative process is distilled out of elementary science courses and this causes casual students of science to believe that new ideas and concepts of science were created by scientists plying their scientific trade using the rational processes of induction and deduction. Quite something else is true, as Barfield repeatedly points out.

It is the imagination of Einstein, Bohr, Kekule, Watson, and others that created the breakthroughs in their respective fields. The scientist as a detached observer exists only as a meta-physical (beyond the physical ) fiction. The human mind is not an onlooker on reality but ever a part and a participant in the outside world.

When one perceives, one participates. By perpetuating the illusion of man the camera recording an independent existence, scientists have unknowingly blinded themselves to the participating part that influences the outcomes of all their experiments, both the planned and the unplanned ones. Thus, like the dikes of the Netherlands trying to hold back the storm tides of the North Sea, the imagination does occasionally overwhelm its artificial metaphysical dams and new ideas and concepts come flowing through to revive the sagging sciences of a non-believing, but grateful, mankind who once more re-discovers meaning.