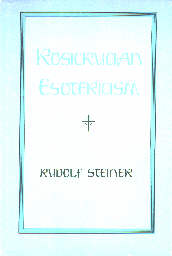 Published by Anthroposophic Press in 1978

This is not a history of Rosicrucianism, but a survey of its esoteric teachings, a survey of the evolution of the solar system, the earth, humankind, animal kingdom, the plant kingdom, and the mineral kingdom. Everywhere Steiner looks he sees the world as one might see a snapshot: What happened just before? What happened just afterward? Long before? Long afterward? Evolution, as the crux of Steiner's teachings, shows clearly through in this series of lectures: it is a glowing crux, a rosy crux. Let us approach this book by asking a series of questions.

Do animals and plants feel pain when they are harvested for food? No, Steiner says, the loss of a single lion is felt by the group lion soul as we might experience clipping the end of a fingernail. The reaping of a huge field of wheat is experienced as a feeling of bliss, as a mother might feel giving milk at her breast to her child.

Does one's life pass before one's eyes at death? Yes, Steiner says, it happens directly (1) one's etheric body emerges from the physical body, because the etheric body contains one's memories. It passes before one's eyes like a movie, a tableau of all the events of one's life presented simultaneously. We observe it objectively, without feeling, until it ends some twenty to sixty hours later.

What happens next? The feeling stage or kamaloka is entered in which one lives one's life backwards at three times speed (like FAST REWIND/REVIEW function on a VCR). During this time we experience feelings in reverse: times of pain in our life are re-experienced as joyous occasions and vice-versa. In Time's Arrow, Martin Amis described a similar time-backwards process. He leads us to observe how Jewish prisoners walk backwards from the fields in the morning watching the souls of their loved ones moving towards the chimneys for their upcoming arrival. In the ovens, German guards take gold fillings from their personal cache and carefully place them in the mouths of the new arrivals shortly before they are resurrected by sucking the poisonous gas from their lungs. Note how the feeling states are reversed when one lives such events backwards in time.

What about our good deeds? Steiner says we re-experience our interactions with others from their feeling states. Thus if we made someone feel good, we feel good. If we caused them pain, we experience the pain they felt as our own pain. The Christian concept of sin leading to suffering in Hell seems consonant with Steiner's description of kamaloka. The other Christian concept of "if you suffer on earth, your reward will be in heaven" also fits nicely. Completing the process of kamaloka returns one to a childlike state, free from sorrow, and, as a child, prepares us "to enter the kingdom of heaven."

Is the physical body the grossest and least evolved of the four bodies of man, namely: the physical, etheric, astral, and ego bodies? Steiner's answer is a resounding NO! Rather, he says, the physical body "is the most perfect member. The physical body is the oldest member of man's being, hence also the most perfect." In Steiner's evolutionary scheme, man is the oldest of the beings on earth today. The mineral, plant, and animal kingdoms came into existence after man. He gives the following order and places each in its evolutionary epoch: Human Kingdom (old Saturn epoch), Human & Animal Kingdoms (old Sun epoch), Human, Animal, & Plant Kingdoms (old Moon epoch), and the current earth epoch having all four kingdoms. During the old epochs Steiner suggests that humans were vaporous beings, that we only reached physical body status after earth separated from the moon at the end of the old Moon epoch. Once separated from the moon, the four-bodied human kingdom began its journey into becoming master of the physical plane. During the Greco-Roman era the evolution of man into physicality became so complete that some breakthrough was necessary to help bring physical man back to the spirit world after death. The redemption came in the form of the Sun Spirit of Zarathushtra (Christ) who incarnated in a physical body, Jesus of Nazareth, on earth in order to lead souls back to the spirit world. When the blood of Jesus flowed down from the cross on Golgotha, Steiner says the color of the aura of the entire earth changed. The Christ spirit visited the lost souls of the Greco-Roman period that were wandering aimlessly in Hell and infused them with the light of the Spirit. From the time of Christ on we have continued our evolution into mastery of the physical world, but the gates of Hell have remained open ever since.

What is the next step in evolution? Having completely mastered the physical plane with our 20th Century Quantum Mechanics, we have increasingly found our physicality to be a tenuous chimera of illusion. With Einstein, Heisenberg, et al, we discover that there is no ultimate physicality, only aggregates of energy. If one considers spirit as pure energy, one can arrive at the conclusion with Steiner that there is a super-sensible world that is not capable of being sensed by the crude machines of the quantum physicist. Only by that most perfect instrument, humankind itself, can this super-sensible world be discerned. With the acceptance of this super reality by a larger and larger portion of humanity, people will begin to develop super-sensible sight, and we will evolve into humanity's next phase, humankind as a physical and spiritual being.

1. Steiner's translators uses the word directly in the sense of as soon as.