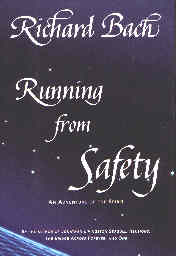 A READER'S JOURNAL, Volume 1
:
Running From Safety
by
Richard Bach
An Adventure of the Spirit
Published by William Morrow And Company in 1994
Book Review by Bobby Matherne ©2002

In this adventure of his spirit, Richard Bach proves himself to be an umbrologist -- which, as he defines it on page ninety-five, is "A physician who treats disorders of the shadow." He then goes on to wrestle with his shadow, Dickie, who appears to him as a nine-year old boy -- not just any nine-year old boy, but his own self at nine years old -- come into the present to allow Richard to keep a promise he made to Dickie in 1944. As his teaching angel Shepherd reminds him:

In 1944, when I told you that time was not the wall for me that it was for you. You promised that in fifty years you'd write a book to take back, just for the boy you were, everything you know, what to look out for, how to be happy, knowledge to save your life, things you wish you'd known when you were him.

When Richard calls for Dickie to come he is greeted by a vituperative fury of words fueled by fifty years of isolation in a small cell. Dickie makes it clear he would like to torch Richard with a flame thrower, not talk to him. But talk he does, and an adventure and dialogue of a fifty-nine year old and his nine-year old self begins. Dickie is taken up in Daisy and shown how to fly, fulfilling a childhood dream of his. Other times Richard visits Dickie's world, a large, lifeless desert plain. With each repeat encounter, however, he discovers green patches and new vegetation appearing as this inner world gathers life into itself.

With Dickie's help Richard recovers memories of his brother Bobby who died very young. With Richard's help Dickie learns about what it is to be an adult. Example:

You don't want a million answers as much as you want a few forever questions. The questions are diamonds you hold in the light. Study a lifetime and you see different colors from the same jewel.

These forever questions are similar to what I've called unanswered questions -- it is sometimes better to leave a question unanswered so that the tension to answer it does not drain completely away in some trite response, but continues with full force over the years. And when it's answered with clarity, how do you know the answer's the right one? Richard tells Dickie:

I don't. But every question's a tension inside, a little electric shock, and it crackles through me till it finds an answer. When a question touches an answer, it grounds on intuition, there's a blue flash, the tension's gone. It doesn't say right or wrong, it just says answered.

Dickie asks for an example and Richard tells him his question about his carefree barnstorming days, "Why can't everybody live this way?" The answer that eventually came, "Everybody can't do any one thing, but anybody can!"

Another essential character, always moving in the background, is his wife Leslie. Showing the incredible rapport that comes with marital intimacy, in Chapter Thirty-six, Leslie is awakened by Richard holding a conversation in his head with Dickie. The author muses"

How can Leslie tell I'm awake? How can a deer tell when a leaf falls silently in her forest? She hears it breathing differently.

Where did the title come from? One place is page 155, where Richard tells Dickie to forget safety as an ambition, that:

Running from safety is the only way to make your last word Yes!"