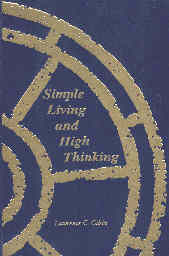 I read this book because I wanted to know the capabilities of the man, Larry Gibbs, who wrote the book and of his editor, Evan Soulé, Jr who produced it. My comments within this review are about the man who wrote the book, all 688 pages of it.

The last 688 page book I read was Science and Sanity by Alfred O. Korzybski. It took me a year to complete that reading, and I devoted some time nearly every day to reading it. Reading only one or two pages took as long as an hour to finish, and it took me the rest of the day, maybe two days, to assimilate what I'd read. To the extent a book is original and fresh, the ideas are creations of the author. The more original the ideas, the more not-me they are. Assimilation is the process of turning the not-me into me.

Reading a book all the way through, especially a long book, can be pleasant or it can be a chore. If the author fills the book with writing that is easy to read, he removes thereby the chore, Gibbs has done this job very well. He has constructed a fine book: first, he has laid a sound foundation with the title, Simple Living and High Thinking. The title titillated me for a day or so. What was it about the title? Finally I got it -- Larry Gibbs had inverted the goal, albeit tacit, of the majority of Americans today, namely, "High Living and Simple Thinking". A solid foundation for appealing to the average American, who is more likely to watch "Home Improvements" on TV than read a book of any kind.

After assimilating the title, I dove into the book and found it to be filled with the dreams, ideals, and goals of the author, with rules for simple living and high thinking.

His rules for simple living, from page 65, are:

His rules for high thinking, from page 65, are:

What kind of book is this? When I told someone who knew Larry Gibbs that I was reading a book he'd written, she said, "Is it a motivational book?" I answered, "Yes, and even more." This book is filled with stories from motivational tapes (like Earl Nightingale), quotations from inspirational writers (like Pierre Teilhard de Chardin), and personal stories from the life of Larry Gibbs. All with his stated intention to "efficiently transfer wisdom from one generation to the next thereby improving on those ideas which naturally promote spiritual, physical, and intellectual growth."

On page 664 he gives us a quotation from one of his favorite writers, Elbert Hubbard, that contains the seed of the book title,

In every century, a few men have lived who knew the value of plain living and high thinking, and very often the men who reversed the maxim have passed him the hemlock.

Those who reverse the maxim contained in the title of Gibbs's book today are clearly his intended readers. Giordano Bruno, a hero of Gibbs, was known for his simple living and high thinking. In the beginning of the seventeenth century, Bruno had studied the mountains on the moon in his telescope and claimed that the earth was only one of many planets orbiting suns throughout the universe. Jailed by the Inquisition for seven years, he refused to recant his beliefs and "On the 17th of February of 1600, he was burned alive in the Field of Flowers with a gag on his tongue." [near Venice, Italy] What was his crime? He refused to kowtow to an Inquisitor who believed in the simple truths of the Church (simple thinking) and who enjoyed the high living of a top official of the Church. Instead of hemlock Bruno was burned at the stake in the simple thought that stopping his tongue would stop his high thinking.

Gibbs recounts the story of an eagle raised as a prairie chicken, who forgets his heritage and is condemned to scratch out a living on the ground, never to arch the sky with his majestic fellow eagles. Gibbs speaks as an eagle to the prairie chickens of the world, begging them to give another thought to the "magnificent eagle soaring high in the clear blue skies." At this early point in the book (page xiii), one gets a glimpse of a father instructing his children through his book. On page 683 he confirms this didactic goal with these words, "I hope the completion of this book starts the formal process of codifying and improving upon my family's ideas and philosophies."

Carl Gustav Jung said that there is nothing that so motivates children as what their parents almost, but never quite did in their own lives. I know that to be the case in my life, as I see its operation in the lives of my adult children's choice of careers. Perhaps through the effort of writing this book, one of Gibbs's children will be motivated to become a great writer.