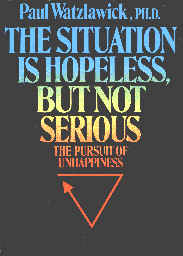 The Situation is Hopeless, But Not Serious
by
Paul Watzlawick
The Pursuit of Unhappiness
Published by W. W. Norton & Company in 1983
Book Review by Bobby Matherne ©2002

Note the subtitle of this book is The Pursuit of Unhappiness. Knowing that happiness is something that happens spontaneously, Watzlawick devotes this book to a study of ways for folks to carefully pursue unhappiness. By cataloging the most popular ways that folks make themselves unhappy and giving intricate details on how to do it, those folks who recognize their own strategies for creating unhappiness as they read this book, will be unable to perform the tasks as well as before, their careful processes for making themselves unhappy will be broken!

One predicament is choosing to operate on the world the way one thinks it should be instead of the way it is. Watzlawick says of such a person, "As captain of his ship, which the rats have already abandoned, he heroically steers into the stormy night."

Of another favorite predicament, "Games with the Past", Watzlawick details four variations for the reader to consider:

1) Glorification of the Past: Seeing one's youth as Paradise Lost and "making it into an inexhaustible reservoir of nostalgic misery."

2) Mrs. Lot: Looking back obsessively on the past so as to avoid any possibility of discovering something new in the present, in effect, turning oneself into stone.

3) The Fatal Glass of Beer: In this predicament, the single act of sinning starts an irreversible decline (like the young man drinking his first glass of beer in W. C. Fields' movie, The Fatal Glass of Beer). "Then I sinned, but now I am the victim of my own sin." Watzlawick tells us in the voice of the hopelessly lost sinner.

4) More of the Same: The story is of Nasruddin, the Sufi joker sage, who was crawling around the campfire in front of his desert tent when a friend walked by.

Sounds absurd, doesn't it? If you look in the wrong place, you will never find what you're looking for, right? Yes, but continuing the game of "more of the same, is one of the most effective recipes for disaster that has gradually evolved on our planet."

The only hope for the irrepressible "more of the same" player is to follow these two directions explicitly: [Liberally reworded from the author's text.]

1) You must keep doing what you're doing the same way, since only one way of doing it is permitted, and if the way you choose to do it is not working, just apply yourself more forcefully.

2) Under no circumstances doubt the assumption that there is only one way to do it; only your application of that one way and its effectiveness may be questioned and refined.

After these playful romps with the past, Watzlawick examines other ingenious ways that people use to make themselves unhappy. As Margaret Mead pointed out, while an American would pretend to have a headache to avoid an unpleasant social engagement, a Russian would have to have a headache. The American suffers from a hurting conscience, and the Russian from a hurting head.

For persons unfamiliar with the tools of the average paranoiac, Watzlawick, in The Story of the Hammer, gives details on how to convert floaters into failing vision, tinnitus into hearing loss, and one's friends into co-conspirators. It only takes a little practice with the detailed exercises to become proficient.

Given that all these simple tools may never allow one to achieve the true unhappiness of Oedipus, Watzlawick points out how the self-fulfilling prophecy, conscientiously applied, can save the day. He leads us to see Karl Popper's point that "the very actions that Oedipus took in order to avoid the horrifying predictions of the oracle led to the fatal fulfillment of those predictions."

Need stronger ammunition? Try mixing messages at the object and relationship level, Watzlawick suggests. "Do you like the soup I made especially for you?" If it tastes bad and you say, "No" honestly, the relationship will suffer. Some folks spend their entire lives nourishing themselves on bad tasting soup rather than risk upsetting the relationship by telling the truth.

The author finally unsheathes the most powerful weapon of all in his armamentarium, the "Be Spontaneous" Paradox. It's use is demonstrated below by two unhappiness experts:

Any request or command for a spontaneous act will cause other persons to be unable to perform the act spontaneously. Whether it's to: "Go to sleep", "Show me you love me", "Be happy", or even "Do a good job", the mere gracing of their ears with the request will make it difficult or impossible for them to perform as requested. This is the reason why actors before a stage performance are told to "Break a leg". Since breaking a leg can only happen spontaneously, it will not happen on command, and the actors are not stuck in the exquisite "Be Spontaneous" paradox of being wished to "Perform well tonight". Even the simple request by a photographer to "Smile" will evoke a faked or posed smile in place of a genuine one. True unhappiness enthusiasts are experts at the "Be Spontaneous" paradox.

With so many effective ways to create unhappiness, small wonder that one can continue along unhappy for a lifetime, when merely stopping one's pursuit of unhappiness would allow one to be happy in a moment. "The situation is hopeless," Watzlawick ends his small book saying, "and the solution is hopelessly simple."