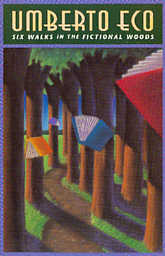 I first read this book in April 1994. I remember it well because when I reached page 88 on April 14, 1994, I read the following, " . . . today is Wednesday, April 14, 1993 . . . ". Exactly one year, 365 days, had passed from when Eco wrote the original words until I read them in a finished book, second printing. I noted the date in the book, and later, on August 14, 1995, I again encountered the same page in the course of re-reading this book, one year and four months later. I return to Six Walks like Eco gets lost in the woods in Sylvie. After his first reading of Sylvie at the age of twenty, Eco returned to it time and again: in his papers, seminars, and graduate courses he gave on the novel. He says, "Every time I picked up Sylvie, even though I knew it in such an anatomical way — perhaps because I knew it so well — I fall in love with it again, as if I were reading it for the first time." Eco gets lost in Sylvie's fictional woods like I did in the Foxborough State Park on my trail bike. Soon I came to know where all the trails came out, where all the waterfalls were, where the granite quarry was, but still I rode to enjoy new combinations of trails and the changing of the terrain with the different seasons of the year. Each time Eco's Model Reader reads the same book another time, the Empirical Reader is experiencing a different season of the year, of life. During our perambulations with Eco, we discover there are Model Authors and Empirical Authors as well — makes for a busy reading time, since four's company.

Here is a potpourri of Eco from Six Walks:

Eco gives a process description of a pornographic film: what is non-sexual takes as long as real life, what is sexual takes much longer.

Eco asks, "How can a verbal text put something before our eyes as if we could see it." He explains how the impression of space is created by expanding "both the discourse time and reading in relation to the story time."

Eco points out that "it was believed that the Morning Star was different from the Evening Star (Hesperus and Phosphorus, as they were called), but that these are really the same celestial body — namely, Venus." Thus, those who worshiped the Morning Star held their adorations in the morning. They were loath to believe that the object of worship of their evening worshiping brethren was the same as their beloved morning icon. Two perspectives, one object.

Eco says, "During the seventeenth century, Francis Lodwick put forward the idea that original names were the names not substances but of actions." Like the American Indian names we hear today, such as "Dances With Wolves" or "Rainbow Dancing Waters." The focus is on the action, the process, not the thing. Using this naming process, one might call Umberto Eco: "Walks in Fictional Woods."