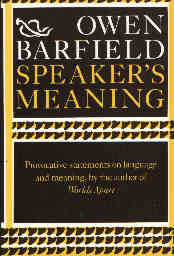 The quote from Collingwood that, "all real history is the history of thought," sets the theme for this book derived from four lectures Barfield gave at Brandeis University as visiting professor. Collingwood, he says, would distinguish historical events from natural events in that historical events have an "inside" and "outside" and natural events have only an "outside." I took issue with that immediately on page 21, noting my belief that both historical and natural events have an "inside" as well as an "outside." I need go no further than to point out Jane Roberts' fine book, The Individual and the Nature of Mass Events. In it she details the "inside" dimensions of a devastating hurricane that hit North America.

Barfield sidesteps the problem posed by Collingwood's view except to point out the innate presuppositions that such a view entail. Until, that is, the very end of the book, when he presents a view very much consonant with Jane Roberts's view. I was not surprised to find this so, having read several of Barfield's books, but, to my knowledge, Jane Roberts read neither Owen Barfield's nor his mentor, Rudolf Steiner's works.

When finally on page 97 of this 117 page book Barfield relates his problem with Collingwood's statement on the lack of "insides" of natural events - he warns the reader first that he is preparing to violate two serious taboos. Two heresies, I would say in the original Greek meaning of heresy as "optional views." He cites the sacred presuppositions whose tenets he will violate as 1) "inside" is a function of the "outside" ( i.e., subjectivity is a product of a stimulated organism), and 2) the existence of matter must have preceded the existence of mind.

By violation of these taboos, Barfield is able to state his fundamental belief that historical events and natural events have both an "inside" and an "outside." That "inside" in homo sapiens he calls "instinct" (Jung would call it "collective unconscious") and identifies it as a "superindividual wisdom at work in nature." Carl Jung and Jane Roberts would be nodding their heads heartily in agreement right now, given the chance.