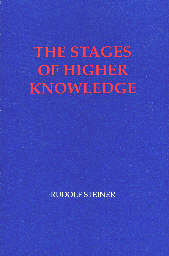 Published by Anthroposophic Press in 1967

I took this fifty-eight page book with me to the opening day of the New Orleans Jazz Fest because it was easy to carry on me. Reading it while they set up the stages for the next musical group between sets, I was struck by the synchronicity of the title "stages of higher knowledge" and the musical stages in front of me. I wondered if there was some higher knowledge in music than I had suspected before. Anyone who has read James Redfield's The Celestine Prophecy should be sensitive to such parallel occurrences in their lives and ready to investigate deeper when they occur. Towards the end of the book I encountered the following quote:

Just as Imagination may be called a spiritual seeing, so may Inspiration be called a spiritual hearing. Of course, it must be quite clear that by the expression "hearing" is meant a perception still further removed from sensory-hearing in the physical world than "sight" in the imaginative (astral) world is removed from seeing with the physical eyes.

To describe the stages of material knowledge, Steiner uses a circular object like a saucer. The seeing or perception of the saucer is sensation. We look away from the saucer and we have the image of the circular object. With the image of the circular shape in mind, one might discover that this is a unique shape, one that has one point on it that is equidistant from all points on its circumference, that is, its center. This is the conceptual or concept stage. In the fourth or ego stage, the ego stores the union of the image and concept and orients itself by recalling concepts of similar images. the name flying saucer given to UFO's is an example of this process. The UFO's resembled a saucer in their shape, and also looked like other flying objects, so the two concepts were joined by the ego into one phrase, "flying saucer". Thus the ego stores the impression made by the still unidentified flying object.

The remaining three chapters are devoted to Imagination, Inspiration, and Intuition. One can note from my table of correspondences above that the Imaginative stage has no sensation component, beginning at the Image level. The Inspiration stage begins at the Conceptual level, and the Intuitive at the ego level. What happens in these higher stages? This small book requires intense study to glean the meanings Steiner is pointing to, but the following quote from page fifty may be helpful:

When the observer in the higher worlds once knows what Imagination really is, he soon acquires the conviction that the pictures of the astral world are not merely pictures, but manifestations of spiritual beings. He comes to know that these imaginative pictures have reference to spirit or soul beings just as do sensory colors to sensory things or beings.

"Of course," Steiner adds, "he will have yet much to learn." Of course.