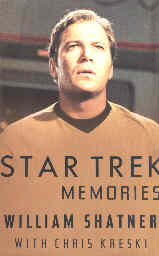 "Captain's Log: these are the voyages of the Starship Enterprise — its three-year mission: to explore strange new worlds of TV series, to boldly go where only Gene Roddenberry's mind has gone before." Had it not been for Gene, this weekly science fiction series would have ended up as another bad Lost in Space insult to viewers' intelligence. In fact, CBS called Roddenberry in to pitch their executives on Star Trek. Instead of the perfunctory 20-minute spiel to underlings, Roddenberry was intensively grilled for three hours by the top studio executives. After Gene left they used his ideas of how to do a science fiction show to create Lost in Space on a weekly series budget. They stole his original ideas such as his "Similar Planets" concept: visit only planetoids with oxygen atmosphere similar to earth's to avoid space suits. Other ideas from Gene were re-usable sets and a constant cast with well-known guest stars. Every good idea used in CBS's Lost in Space series was stolen from Gene during that three hour meeting. CBS: the Creepy Bastards of Sleaze. I will never work for that network or present an idea to them after learning of this penchant on their part.

On a lighter note: Shatner loved practical jokes and loved to steal Nimoy's bicycle. Nimoy pedaled to lunch every day and reached the commissary across the lot before the rest of the cast. One day Bill chained it to a fireplug, the next day he hoisted to the top of a sound stage, and finally he locked it in his own dressing room guarded by a Doberman with an attitude. Apparently Nimoy's sense of humor exceeded Spock's by several parsecs.

Bill tells story about Gary Lockwood's appearance on Where No Man Has Gone. After a long tussle with Gary, Kirk plopped him on the ground at Sally Kellerman's feet and Gary's pants ripped all apart, exposing his lower torso, which was missing underwear. Gary looked up sheepishly at Sally and muttered, "I guess I took your picture." Undaunted, Sally looked down at his bare crotch and, without a pause, said, "What? With that little Brownie?" On the sidelines Kirk was rolling on the floor laughing.

This book is a delightful read for insights into Shatner, Nimoy, Roddenberry, Coon, Justman, and Freiberger. From its shaky start to its ultimate cancellation, none of the Star Trek cast members had any inkling of the huge success that awaited them in syndication. A smart ass and very likeable guy, Shatner tells good stories, and tells them from many points of view, just as the great Captain James Tiberius Kirk, commander of the Starship Enterprise, most certainly would.