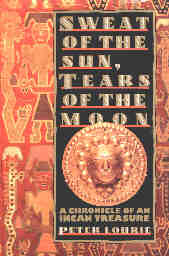 A READER'S JOURNAL, Volume 1
:
Sweat of the Sun, Tears of the Moon
by
Peter Lourie
A Chronicle of an Incan Treasure
Published by Atheneum Press in 1991
Book Review by Bobby Matherne ©2002

The author begins with a quote from Joseph Conrad's Nostrodomo, "There is no getting away from a treasure once it has fixed in your mind," and proves the quote to be true in the rest of the book. For the first part of the book, I was entranced by the various stories of the treasure: how Pizarro pillaged the Incan temples and how the Incas hid the $8 billion of gold (sweat of the sun) and silver (tears of the moon) in the world's most inaccessible place. By the time one reached the place one was too tired to care about the treasure to bring much, if anything, out. In the middle of the book, I was entranced by the preparations for the trip, first with Diego, then with Brunner. As the time to the trip grew shorter, the flashbacks to more stories of Diego and Brunner led me to suspect that the trip would never come off.

After several years in New York trying to write about a treasure he never took a trip to find, Lourie returned to Ecuador to finally make the trip. Freshly outfitted he hired a small team of guides and followed them into the inhospitable reaches of the Andes. Climbing seven thousand feet in ten hours through an icy fog, trudging through a quaking bog, they finally reached Brunner's camp on the edge of the man-made lake at 14,000 feet which was thought to contain the hundreds of tons of gold and silver artifacts of Inca treasure.

The treasure that had fastened itself on his mind held Lourie fixed there above the lake as the three mountains raised their foggy skirts to offer him a rare unobstructed view of their majestic 20,000 foot high peaks. Then, perhaps because he no longer desired the treasure, the peaks allowed him to leave the mountains intact to write about his experiences. His object had become to experience firsthand the journey into the Llanganti Cordillera that he had heard described so many different ways by explorers. When the trip finally comes, very late in the book, the reader is as ready as he is to follow the Way of the Incas to Brunning Lake and to be transformed by their journey to the "sweat of the sun, tears of the moon."