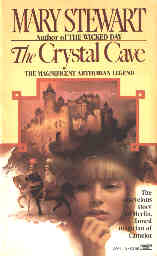 Good for a one-day read through, The Crystal Cave is a guided tour through Merlin's early life. When his question of "Will I ever find Arthur?" is answered "No." he creates him. The cave of crystal is a large geode of crystals big enough to hold a man which Merlin's teacher shows him how to use for prophesying. He lies down inside it and visions overcome him which later prove useful.

The author does a good job of separating the super powers of Merlin (the prophecies, which are out of his control, as he explains many times to his various patrons) from the mundane human powers of courage, bluff, and intelligence. The reader is given a ride inside Merlin's head so that one can discern bluff from vision while the others in Merlin's world perceive both as magic. When the pool in the mountain is drained and the predicted dragons are not produced, Merlin holds resolutely to his prophecy and a strong wind rends the King's dragon banner, which then drops into the pond. The onlookers are astonished by Merlin's magic as we share with Merlin his secret delight that it came to pass.

Merlin comes across as a human being with an occasional numinous insight and sporadic unconscious channeling of prophecies. Born into a time of changing alliances, he becomes the catalyst of the union of Greater Britain and Lesser Britain (Brittany) under King Arthur's father/uncle.

How Merlin escapes being slaughtered so that his blood (born of no-man) might seal the foundations of the King's tower that is collapsing is worth the price of the book in itself.

On page 162 there is an excellent description of his eyes during one of his visions - the author tells of his dilated pupils and inspired the following lines for me:

"pupils wide and dark,
the anchors of his eyes a-hoist —
his ship's a-sail in inner seas"

You, dear reader, can hoist your own anchor and sail your inner seas with Merlin for the price of a paperback and a few hours of your time.