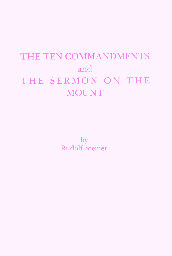 Published by Anthroposophic Press in 1978

Nowhere is Steiner's dedication to furthering the understanding of the evolution of consciousness more apparent or more important than in this lecture. In his words "it is the word and soul value that the whole thing had in its own time that is important." (italics mine) To understand Steiner's interpretation of each commandment one must use one's active imagination and project oneself into the time of Moses. This requires one to shed the evolution of consciousness that has occurred since then.

Steiner's major thrust is the first commandment, which, in his view, admonished the Hebrews that their lives had dramatically changed by the adding of the ego body to their astral, ether, and physical bodies. The ego body was the "I AM" and was ineffable, i.e., not capable of being expressed by any of the lower three bodies. The astral body could not express it in thoughts or words. The ether body, in feelings, and the physical body in material form. The lower three bodies were associated with the three lower kingdoms of animal, plant, and mineral, so the admonition of the first commandment made taboo any idols or representations of God in either animal, vegetable, or mineral form. Thus Moses became angry at the sight of the Golden Bull, which represented both the mineral and the animal kingdoms at once.

As for the third or astral kingdom, the realm of thoughts, the Hebrews were not allowed to speak the name of God (the I AM) because that used the functions of the astral body. The peoples in Egypt at that time had their three lower bodies, their astral, their ether, and their physical bodies in bondage. Thus the ego body or "I AM" had, of necessity, to lead its chosen people out of Egypt. Once in the desert, they began to experience the wonderful new forces of their ego body that had entered them. The advent of the ego body completely changed the hierarchy of the three lower bodies by completing the quaternary of bodies of the evolved human -- the highest evolution at that time. Once in the desert, Moses presented his people with the first commandment, which ends with "Thou shalt have no other gods before me." (KJSV) In this way the new ego body, the new "I AM" (Jahweh or God), clearly stated the superiority of the ego body over the lower bodies, or the other gods and idols used to represent them. The astral representation of the new ego body, the word JAHWEH ("I AM" in Hebrew) was considered so sacred that only the rabbi in the temple on high holy days could say the name aloud.

Steiner dispatches the remainder of the commandments in like fashion. A brief summary of his treatment of each follows.

Third: "What lives in you as 'I' created the world in six days and lived within Himself on the seventh day."

Fourth: The new ego force will be a legacy to your descendants.

Fifth, Sixth, Seventh: These proscribed activities weaken the ego power in you. Avoid them.

Nine, Ten: Strive for the love of another, not his possessions, for envy weakens your ego power.

The other key point made by Steiner was that the Jewish people were told to become a people of rabbis, of priests. Whereas formerly only rabbis and great healers had an individual "I AM" that spoke to them to pass on to the common people, thenceforth the common people were to possess an individual "I AM." Moses was one such great leader, and, as must happen during a paradigmatic shift, the bridge to a new paradigm must be built upon the foundation of the old paradigm. All churches would do well today to acknowledge this point of Steiner's to discard the view of the priest as an essential link to God, and rather to present the priest as a dispensable part of the journey to our individual living "I AM" from now on.