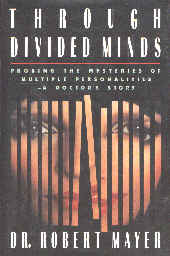 In this engrossing book, Mayer takes us between the scenes of his treatment of several multiple personality disorders (MPD), Toby, Susan, and Laura. He confronts MPD for the first time in Toby and is unsure if his new client is just manipulating him or not. To his credit, he begins a study of MPD and finds help from several professionals. During his search for help he encounters a therapist with Odyssey House who has been working with MPD's in OH's drug treatment program. From this contact he takes on two new MPD's, Laura and Susan.

One of his MPD has five dominant selves that take over and each self smokes a different brand of cigarettes. Mayer notes this and is can identify the self that is present by observing whether Kools, Salem, or Marlboro is being smoked. She also kept 5 wigs of different styles and colors and a gay male personality, Jefferson, whose job is to clean house, do her various hairdos, and who likes it when she has sex with her boyfriends.

He attempts a premature integration with Toby using a Bandler and Grinder technique that he had just read about in "Frogs into Princes." The maneuver fails miserably and ends with one of the youngest of Toby's parts crying that its head had been squashed. Later in the book, he uses the identical technique and it works. (He only credits Bandler and Grinder at the time of the failure, however.)

He details his seminars with Milton Erickson on Hayward Avenue - the best written description I've come across. A trained Freudian, Mayer is severely taken aback when Milton begins by attacking Freud for several hours. Then he notices that he's entered an exquisite trance state. Mayer had dissociated when confronted by overwhelming pain (caused by Erickson's attack of Freud) in just the way that Mayer's clients had in their youth. He had received from the master hypnotist a first hand experience of his clients process. The day Mayer was to leave Phoenix he delayed his flight and, driving around town, soon found himself climbing to top of Squaw Peak. Milton had created a mountain-climbing self in Mayer for demonstration and therapeutic purposes, as he did in so many of his other clients.