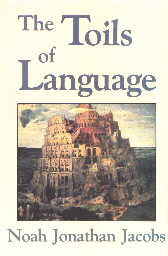 From the pomological scandal in Eden to the metaphysician of the privy seat (Rodin's Thinker) to the blessed warm mental fog of Conrad - the reader is treated to a cornucopia of scrupulously coined phrases and fresh quotations from thousand of years of authors.

Jacobs, leaving no one un-touched by his coruscating etymology, uncovers for us that Jacob means heel, from the story where Jacob followed on the heels of Esau (in the birth canal). An interesting

sidelight for me is that my replacement in a job years ago was named Jacob - he was a heel and he followed on my heels.

Dictionaries are the cemeteries of forgotten words, where they constitute more than one-fifth of the total number. Jacobs seems intent in the course of this 125 page book on exhuming many of those words. Examples are tantivy (a hunting cry), swink, yuly, tweedle, and accismus. He re-livens the quotidian word janitor by reminding us of its roots in Janus, god of doors and entrances.

He tells us of Pro-metheus (fore-thought) who stole the fire (intuition) from the gods for the good of men and Epi-metheus (after-thought) who opened Pandora's Box. The unleashing of the plagues on mankind that afterthought started goes on today. The news media revel in after-the-fact examination of motives. Projections of the future from these examinations fill newspapers and airwaves daily with doom and gloom to as great an extent as the plagues unleashed from Pandora's Box.

With a little Promethean insight into the dangers of Epimethean afterthought, we might be allowed the space to hope in cheerful expectation of a tomorrow brighter than today.