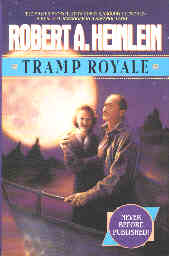 A READER'S JOURNAL, Volume 1
:
Tramp Royale
by
Robert Heinlein
The Master Storyteller's Travels Around the World
A Real-Life Stranger in a Strange Land
Published by The Berkeley Publishing Group in 1992
Book Review by Bob Matherne ©2002

When Heinlein's wife Ticky insisted that they go around the world by ship instead of airplane, Robert "firmly gave in." When she insisted that two bags were not enough, he did likewise, and they carried ten stuffed suitcases. At every step of the way Ticky flirted with incarceration by the local gendarmes by stretching and twisting points of law much to Heinlein's chagrin. When a customs official asked what she had to declare, she said, "Two pounds of heroin." Luckily the official had a sense of humor and let her by unmolested, which is more that her husband did. But his exhortations after the fact had little effect on his indomitable spouse who reminded me much more of Lazarus Long than Heinlein did. Nothing seemed to faze her disdain for petty tyrants and their Xmas rolls of red tape.

He told her the story of the two dogs who crossed paths at the Chile-Argentina border, each emigrating to the other's home land. "Why would you leave a land where you are so well-fed?" the skinny Chilean dog inquired incredulously. "I thought I'd like to bark," came the answer. But that did little to curb her open dislike for officials at all levels. Somehow Robert managed to smuggle her into and out of Juan Peron's tight-lipped fiefdom of Argentina without her tongue landing them both in jail.

They toured the world mostly in a cargo ship in first class, and their accommodations seemed preferable to most large ocean liners due to the smaller number of passengers and the close, personal service. Most of their travel was below the equator, across South America, South Africa and Australia. Their favorite places were the Panama Canal, Uruguay, and South Africa. Their least favorites were Indonesia, Australia, and New Zealand. "Dreary Utopia" he referred to NZ in the chapter heading, giving it low marks for hotels, food, and service -- even the scenery could be easily matched by the Northwestern section of the US, he thought, and in far more comfort.

At times reading this book I would lapse into a reverie in which I imagined I was reading one of his novels and it was Lazarus Long and his wife Dora visiting earth during the 1950's. Long was on vacation, however, and not much happened -- except for one very detailed history lesson of the world during that time period, told by someone who observes everything and reports it with clarity. We see ourselves in the 1950's, the good, the bad, and the ugly -- and get to judge how far we have come since then. For the price of this book, we can take a trip around the world without the inconveniences of bad food, seasickness, and interminable customs red tape -- quite a bargain all the way around. I was struck by many of the changes in the world in forty years (she would say "Two kilos of heroin" now) -- the shrinking of the British Empire, the disappearance of communism, the appearance of US fast food places all over, and many other minor things.

At the end of the book RH says he'd like to take another trip around the world, this time across the Northern Hemisphere, but he'd like to wait till he can travel completely in non-communist territory. If he'd lived only a handful more years, he could have done just that.