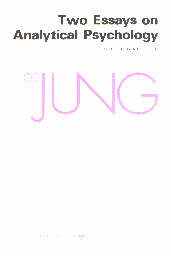 In this book Jung gives the most powerful presentation of his philosophy of the reality of the psyche. At one point he offer the caveat that readers do not take his writings as a description of how one does therapy. His interest is in demonstrating the psychology of the individual, not how to do the therapy on them. This goal pervades the writings assembled in this book and makes it an excellent starting pint for a newcomer to Jung. That is saying a lot since there are few other suggestions for a starting point for a serious beginner in his voluminous works.

He explains in detail the difference between Adler's will to power approach to understanding the psyche and Freud's sexual repression approach. He gives them each credit for a useful and comprehensive addition to the sum of human knowledge about the unconscious and for providing a pragmatic approach to therapy. Along the way the reader comes to understand that both Adler's and Freud's theories are subsumed in Jung comprehensive theory of the unconscious.

Two insights I gained from this book are best described via diagrams. The first one drawn below shows

The second insight comes from page 194 in which he discusses the influence of inner and outer forces in the individual. "To the degree that the world invites the individual to identify with the mask, he is delivered over to influences from within." The attraction of the ego to the persona is like that of a weight to a large body via gravity. As the ego is pulled towards consciousness, the unconscious pulls back via the spring tension of the anima. This creates the conditions of a harmonic oscillator in world of

Here are Jung's words about the oscillation: "The persona, the ideal picture of a man as he should be, is inwardly compensated by feminine weakness, and as the individual outwardly plays the strong man, so he becomes inwardly a woman i.e., the anima, for it is the anima that reacts to the persona. But because the inner world is dark and invisible to the extraverted consciousness, and because a man is all the less capable of conceiving his weaknesses the more he is identified with the persona, the persona's counterpart, the anima remains completely in the dark and is at once projected so that our hero comes under the heel of his wife's slipper. If this results in a considerable increase of her power, she will acquit herself none too well. She becomes inferior, thus providing her husband with the welcome proof that it is not he, the hero, who is inferior in private, but his wife. In return the wife can cherish the illusion, so attractive to many, that at least she has married a hero, unperturbed by her own uselessness. This little game of illusion is often taken to be the whole meaning of life." Thus the harmonic pendulum of the psyche swings back and forth from increasing consciousness to decreasing consciousness (unconsciousness). (If the wife in Jung's scenario above refuses to become inferior, the marriage is not likely to survive the strain in the relationship that results.)