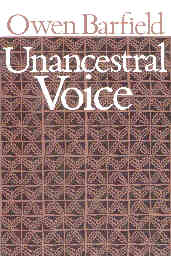 The first half of this book takes place on an ocean liner with Burgeon and two of his friends. They hold long conversations on philosophy that seem to go nowhere. Burgeon becomes aware of a voice speaking inside of him, a voice he calls the "Meggid." Soon the Meggid is speaking through him with his own voice and Burgeon finds himself becoming a channel for the Meggid. Similar to the experiences of Jane Roberts with Seth, J. Z. Knight with Ramatha, and Jack Purcel with Lazaris, Burgeon through Meggid describes the duality of thought and action experienced by a channeler.

The Meggid is interested in the ultimate reality of the universe and shines through particularly well in the episode late in the book when the scientist Flume finishes sharing his views in a lecture on the evolution of physics. The Meggid's conversation with Flume is one of the gems of the book. Flume points out that the progressively finer and finer inspection of the physical world provided by modern physicists has culminated in the realization that the finest particle of the physical world must be of zero size or not be a particle at all.

This leads into a discussion of the creative role of imagination in understanding the ultimate reality of the universe. Barfield mirrors Jane Roberts in her views on imagination as expressed in her book, "The Individual and the Nature of Mass Events."

A key concept in Barfield's view of man's relationship with nature. It runs directly counter to the fad environmentalist trend to view man as apart from nature, as a nemesis of nature.

Thus he reminds us that we carry inside our bodies the highest representation of the whole of nature. This attitude is reminiscent of Ralph Waldo Emerson's glorification of the individual.

To know anything - whether a person, a thing, or a process - entails ... that the mind enters into what is known and unites with the spirit that informs and transforms it.

When men cease to look only for continuity they will find that there is this destruction of the form, this momentary return to chaos in every common seed in the article of its germination.

It will be well to keep this Barfield quote in mind as we experience chaos at all levels of civilization at the onset of the new millennium. It reflects the chaos of germination of the seed of nascent consciousness.