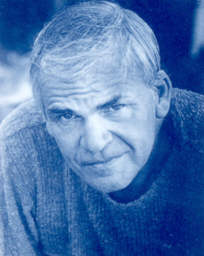 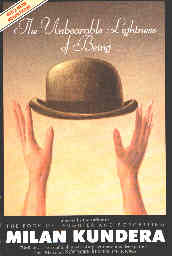 A READER'S JOURNAL, Volume 1
:
The Unbearable Lightness of Being
by
Milan Kundera
Published by Harper&Row in 1985
Book Review by Bob Matherne ©2002

Tomas was a surgeon and a womanizer. With his tools he opened human bodies and looked at what lay hidden inside. When he met a woman he imagined what she looked like without her clothes. Between his imagined version and the real version of her was a gap, in which gap lay what was unimaginable about her. "What is unique about the 'I' hides itself exactly in" that gap. Tomas lived to explore that gap. When his occupation as surgeon was proscribed by the Communists, he became a window washer. Again he got to look inside peoples' lives in the course of his occupation.

Into his life Tereza came. Like a baby set adrift in the bulrushes, she insinuated herself into his life. "He had no desire to uncover anything in Tereza. She had come to him uncovered." Within an hour of meeting, they had made love, she had gotten sick, and she had moved into his apartment. No other woman had ever been allowed to spend the night before. She had won Tomas's heart, but to her chagrin, she had not won his body. Tomas continued his affairs at the rate of about five a week, and Tereza remained faithful to him, enduring the smells of his latest conquest on his hair.

Sabrina, an artist with a bowler hat, was Tomas's mistress and he had her pose nude in the hat for him. Tereza befriended Sabrina and took pictures of her in the nude as if to understand Tomas. She also took photographs of the Prague Spring uprising and was almost executed because of it.

Tomas wrote a letter to the editor in which he pointed out the Oedipal Lament of the Communist sympathizers when confronted with the mass killings of the revolution, "We didn't know!" He asked, "Is a fool on the throne relieved of all responsibility merely because he is a fool?" Oedipus, he pointed out, was completely unconscious of his guilt, but when he discovered it, he put out his eyes and wandered blindly away from Thebes. His letter got him barred from the hospital after he refused to retract his words and led to the Russians sending troops to prevent a rebellion.

In a world of people being reborn on a new planet knowing all that had happened on earth and in previous lifetimes, would life be less bloody on the fifth planet after earth? Surely an optimist would say yes and a pessimist, no, Kundera tells us.

Again and again the "unbearable lightness of being" phrase intrudes itself into the novel as a description of the characters' lives. At the end of the book, Sabrina leaves instructions for her ashes to be scattered over the countryside in one last "lightness of being."

At several places in the novel, Kundera breaks the action to insert a Small Dictionary of Words in which he furthers the action of the novel and illuminates the characters, quite an accomplishment. A cemetery to Sabrina was a place of peace and quiet, especially in wartime, when few other places are guaranteed to be so. To her lover Franz it was but a place of stones and bones. These short excursions into definitions remind us that Kundera's book is a book of insight and philosophy as much as it is a novel. Read the book for the philosophy as much of the philosophy does not make it into the movie.