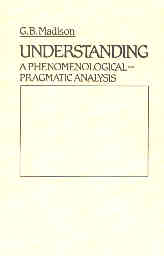 Ever come across a book which made you realize that reading it would affect everything that you would ever read thereafter? This book by G. B. Madison was just such a book for me. I put down "Tangled Wing" and "Dora" to jump merrily into the depths of GBM's critique of the rationalist approach to science. He slices science down to the size of magic and religion by stripping it of its metaphysical accouterments and revealing that the bare flesh of each are identical. Science, magic, and religion are all three systems of belief that are internally consistent and cannot be disproved from within the system(although scientists constantly strive to disprove magic and religion from outside the systems).

GBM points out that the absolutist/relativist argument is fraught with the pitfalls of any consistent, rational system, e.g., to say everything is relative is a clear rational absolutist statement. That is one of the many ways GBM takes us off the uncomfortable horns of a dilemma. He sets us down abruptly in the space between worlds ( the "crack in the cosmic egg" as Joseph Chilton Pearce calls it) to discover the one Reality (the WIGO or What Is Going On of A.O. Korzybski) and the many realities (little "r") that we qua finite humans being experience in our beliefs about the one Reality.

GBM quotes Tom Kuhn repetitively, but the charm of the book is the others he quotes:

Wallace Stevens, "Reality is a cliche from which we escape by metaphor"

Blaize Pascal, "to make light of philosophy is to be a true philosopher."

Arthur Koestler, (paraphrased), "comedy is the collision of two different contexts, science is their fusion and art is their juxtaposition."

And some of the best quotes come from G. B. Madison himself:

"The shaman and scientist do not speak the language, but they are nonetheless engaged in the same activity: interpreting experience by means of theoretical constructs."

"The Theorist's Fallacy is the confusion of a method or doctrine with the very reality it is about."

So what bridges the map (doctrine) and the territory (Reality)? Metaphor - it carries (pherein) us beyond (meta).