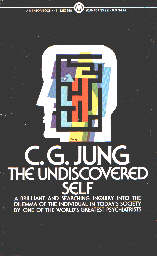 A READER'S JOURNAL, Volume 1
:
The Undiscovered Self
by
C. G. Jung
The Dilemma of the Individual in Today's Society
Published by Penguin Books in 1958
Book Review by Bobby Matherne ©2002

This classic little book written by Jung first appeared in the centennial edition of The Atlantic and popped into my hands in the bookstore the other day. That told me it was time to read or re-read it and I did, straight through in two days. It brought to my mind the strange paradox of reading Jung -even his material written for the layperson - if you can already understand Jung's writings, you can read it and understand it further, if not, reading it will add nothing to your comprehension of Jung. This makes it very hard to get started with Jung. It is reminiscent of the old saying I made up a while back, "When learning something new, it's best to know all about it before you start."

This book is a start. It is about an old subject for Jung: the reality of the psyche. How the dual character of the individual, the ego and the unconscious psyche rule the individual. In addition, Jung demonstrates how the rule of governments mirror the rule of the ego in the individual. In their various forms of despotism, such as dictatorship, communism, and democracy, the ruling classes of society exert influences on the masses of society similar to that which the ego exerts on the life of the individual. The rule of creeds (as Jung calls organized religions with fixed sets of beliefs, but not necessarily spiritual elements) over the autonomy of the individual is ever replaced by other rulers, such as kings, dictators, and tyrannical governments. In each case the ruling class is subject to the foibles of the individual egos of their membership and foist on the governed masses the same onerous restrictions as the rulers they replaced had done, only changed slightly due to current fads and theories.

Thus one comes, with Jung, to see that relief from onerous dictatorship from without can only come by relief from the onerous dictatorship from within - the individual ego. Like external dictatorships condemn individual choice and action as harmful to the aims of the state, so too does the ego condemn the existence of the psyche as an independent existence in the individual. The state maintains control by statistics that nullify the existence of the individual psyche, and the ego maintains control by planting the idea to use statistics in the first place. When analyzing the omnipotent state, one can only come to the conclusion that it is ego all the way down. In Jung's words, "Since it is universally believed that man is merely what his consciousness knows of itself, he regards himself as harmless and so adds stupidity to iniquity. He does not deny that terrible things have happened and still go on happening, but it is always 'the others' who do them. And when such deeds belong to the recent or remote past, they quickly and conveniently sink into the sea of forgetfulness, and that state of chronic woolly-mindedness return which we describe as 'normality'." And further on in the book, he says, "If a world-wide consciousness could arise that all division and all antagonism are due to the splitting of opposites in the psyche, then one would really know where to attack." One would begin the assault within oneself, to come to discover and understand the duality of the ego and the self.