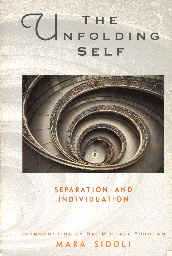 This was a difficult book to get started on — from October till February I had only read the first chapter or so, which shows how difficult it is for an adult to write about or read about those very early experiences in childhood. But, from then now, the subject became a grabber in Sidoli's very capable hands. In Chapter 3 she quotes Jung, "Fairytales seem to be the myths of childhood," and in Chapter 4 she goes on to detail interpretations of a myth from the childhood of mankind, Cain and Abel. As old as the oldest history and as new as the "farmer and the cowhand should be friends" in the musical Oklahoma. The struggle of Right-Brain, holistic, free-ranging cowboys pitted against Left Brain, analytical, fence-building farmers.

In Chapter 5 The Shame of Being 'A Baby', she leads the reader to see that jealousy, guilt, shame, and love all share a trinitarian nature: 1) the self, 2) the other, and 3) the self-other. These three aspects are in a very tight triangular relationship. In the solitary processes of guilt and shame, the other is the introjected parent.

In Chapters 6 and 7 she shows the value of de-integration — that is, the complete release of valued things and abilities in order to move on to a higher level of development. Like the child releasing the teat for the bottle, the thumb for the pacifier, and the pacifier forever, one must constantly separate oneself from the things of this level in order to progress to the next level. "Pathological depression," she writes, "can be considered as a failure of the ego to deintegrate." In Chapter 7 she quotes from Fordham's Self and Autism, ". . . idiopathic autism is a disordered state of integration, owing its persistence to the failure of the self to deintegrate." Autistic children do not have a defect of learning, but of un-learning.

In Chapter 8 she shows how severely disturbed children live in archetypal fantasy worlds and require thinking by a caring adult to find their way out. The thinking becomes their catalyst of deintegration. Again the adult functions not so much to teach them to behave as to give them permission to misbehave — that is, to deintegrate so that they may move on. Jung says maturation or individuation does not progress in a monotonically increasing fashion, but rather in "a series of long ellipses" — where each step up and forward is followed by a regressive deintegrative phase that lays the foundation for the next step of growth. Unless deintegration proceeds in its proper time, "false solutions are arrived at which later cannot be used to meet the task of life demanded of an adult." (Fordham 1973) The child sucks on a pacifier in the third grade and then lives with his mother until she dies when he is an adult. Thus life sucks without timely deintegration. Viva deintegration!