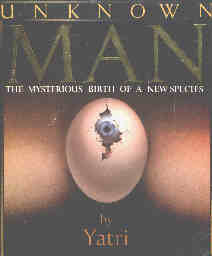 A READER'S JOURNAL, Volume 1
:
Unknown Man by Yatri
The Mysterious Birth of a New Species
Published by Simon&Schuster in 1988
Book Review by Bobby Matherne ©2002

This book provides an intensive look at the mystery that is man, without destroying the mystery. (1) If anything, Yatri helps to deepen the mystery by leading up to questions about the birth of a new species at the advent of the new age of Aquarius.

First, however, he gives the reader a good background on what is known about man and the environment in which we live. He uses establishment science supplanted by such new age elocutionists as Ramantha, Ram Dass, Rajneesh, and Da Free John to create a mandala of creation, which he pictures evolving before our very eyes.

The chakras are integrated into the morphogenetic fields of Sheldrake and create regions of light in the body of U. G. Krishnamurti as he experiences enlightenment. Yatri examines the lives of Gurdjieff, J. Krishnamurti, Da Free John, and other enlightened masters. He uses their capabilities as a guidepost to the future and envisions a species that will be born with their capabilities and keep them consciously into adulthood. Such a species will create the new birth of consciousness on the planet that will usher in the great age of Aquarius.

One quibble I have with Yatri's thesis is his predisposition toward chemical materialism. In spite of his respect for the non-physical aspects of reality, such as morphogenetic fields, chakras, and auras, he portrays an evolution of the chemical-physical body as necessary for the next phase of evolution. In my mind the chemical-physical changes will accompany the change in consciousness, but they will not precede it. Yatri describes new babies being born of the new species with an extra gland, for example. The gland has the job of removing toxins in the environment. Yatri goes on to presuppose that no current human body can do that now, and to my mind, that is a commonly held misconception.

1. From page 90: "For man is a rainbow of miraculous para-normal powers and talents, yet an observer must be in the right relative position to be able to see its full spectrum of hues." This quote reminds me of some left-brain scientists who would insist that the rainbow of ESP, e.g., be visible from all positions or proffer that as proof that ESP and other manifestations of the spiritual world don't exist.