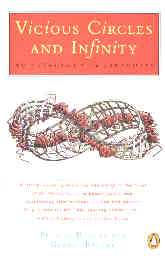 A quick reading of this small book is like a guided tour through the history of paradox. Each page is framed at the top and bottom by a paradoxical quote, including one of my favorites from Laing's Knots, "If I don't know I don't know, I think I know; if I don't know I know, I think I don't know." Each quote is selected to illustrate the text explication that fills the page between the top and bottom quotes. I say `fills the page' because rational-analytic exegeses are not to my taste. To me they are rather like multicolored hors d'oeuvres at a fancy cocktail party - I admire their presentation, but eat very few.

The middle of the book is filled with pages of pictorial paradoxes including photos of an apparent 3-D model of the Escher stairway (you know, the purgatory one - the good guys walk in circles downward while the bad guys walked in circles upward on the same stairway). The text doesn't explain if this Penrose version of the stairway is real or a doctored photo.

The book contains a good explanation of Bertrand Russell's dilemma of the set paradox that delayed and almost scuttled his mathematical work with A. N. Whitehead. Tussling with this paradox of logical types kept Russell busy for several summers, which he spent staring at a blank sheet of paper trying to resolve the paradox in his mind. Finally he hit on the solution of the doctor, who when a patient told him that her arm hurt when she raised it thus over her head, came up with the brilliant suggestion, "Don't do that."

The authors do a good job of explaining the difference between paradox, vicious circles, self-referent statements, and self-referent paradoxes, providing ample examples of each.

If your budget includes room for just one book on paradoxes, this should be the one. For an exercise (from the book) to determine if you're ready for this book, try the following:

If, after doing this you still want more of this foolishness, buy the book.