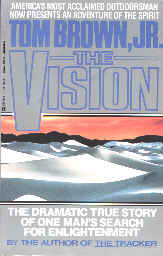 A READER'S JOURNAL, Volume 1
:
The Vision
by
Tom Brown
The Dramatic True Story of
One Man's Search for Enlightenment
Published by Berkley Pub Co. in 1988
Book Review by Bobby Matherne ©2002

Tom Brown takes us back over the territory he marked out in Tracker, but with a newness and freshness that makes it seem all new. It is the story of his life as a young boy growing into manhood in the Pine Barrens wilderness of New Jersey in the companionship of an Amerind playmate and his grandfather. We learn here for the first time about Grandfather's life, how he became a loner, cast out from his tribe by instructions from a great dream he had. He was told to live alone, wander the far reaches of two continents, and finally to live in New Jersey, where he was to locate the young white (Tom Brown) that had appeared in his great dream.

During the training of Tom and his grandson, Grandfather once came into camp in the opposite direction from which the boys had laid a deadfall trap for a rabbit against his orders. That night Grandfather told Tom, "Your deadfall trap has been sprung, but the rabbit got away." Embarrassed, Tom left to investigate the trap. Miles away he found the trap sprung, but no rabbit - and at just the amount of time earlier that corresponded to the time at which Grandfather had told him it was sprung. When he asked how he knew, Grandfather replied, "If a rabbit moved upon your back, would you not feel it?" Grandfather was so attuned to his environment that he experienced everything that happened within miles around. Repeatedly Tom describes human capabilities in the book that are so beyond the normal, that he stretches the credulity of the reader. And it is mostly a stretch for gladness.

The only sour notes in the book are his anti-civilization soapbox and eco-freak railings. One wonders if he considers rayon and aluminum artificial? Computers? Newspapers? Books? "Society doesn't seem to know what rapture is . . ." he says, but does he know society's rapture: museums, symphonies, ballets, films, etc.? Neither does he seem to be aware of society's spirituality in novenas, rosaries, the mystery of communion with the Body of Christ, and the sacrifice of the Mass, because if he were aware, perhaps he could see the rapture himself. If the processes that he discovered from his Amerind friends are so valuable, one would hope he could someday see them also in the midst of his native society as well as he now sees them in the wilderness.